Why are rogues always depicted wearing so many belts? [closed]

I have no idea where to put this, but I had a player ask a really good question about rogues:

Why are they always depicted wearing so many belts?

I've been googling this for a few hours, and while I think there is a reason beyond the "Many Belts" TV trope, I can't find it. What is this about? Why are rogues/thieves so commonly depicted wearing so many belts? 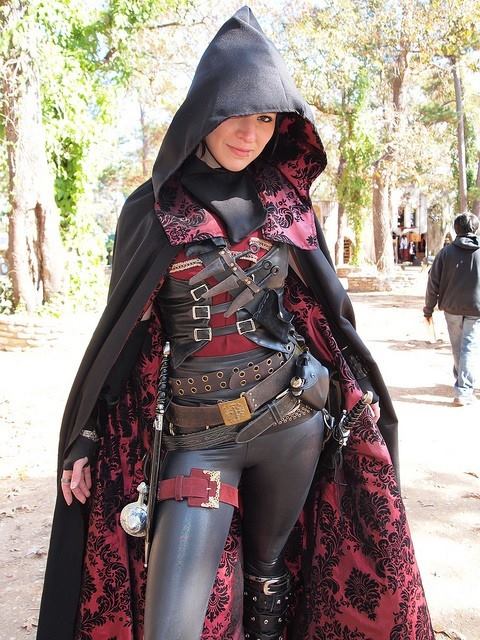 They don't usually wear that many, but generally speaking, Rogues are the stereotypical "prepared for everything" character. They need belts because belts means pouches and other storage locations for stuff. And they have lots of stuff.

As a Rogue, you need room for lockpicks, skeleton keys, daggers, trap-disabling tools, smokebombs, caltrops, coins and gems, poisons, acids, mirrors, and who knows what other things you need when you're a dungeon-looting badass.

As a result, they have more belts and pouches and other storage kits than most people. Which then becomes a stereotype in itself, and so people start to exaggerate.

Not the answer you're looking for? Browse other questions tagged rogue larp art or ask your own question.

10
What monsters are depicted on the 2008 D&D 4e DM Screen?
20
What does Assassinate mean by “surprised”, and can it be used multiple times?
27
How do I make it absolutely clear that I'm shooting you in the face?
28
How should I handle a ruling that really hurts my character?
18
Can an Arcane Trickster Rogue learn all of the wizard spells from the low levels it has slots for?
9
Which Deck of Many Things cards are depicted in this art?
3
How can I design an engaging combat with 4 tanks and one glass cannon?
37
How do I get my players' LARP characters to not be a bunch of murderous cretins?