Rolemaster combat tables present very different results depending on armor type and weapon, but are those results generated by some type of equation or algorithm? Maybe a different equation/algorithm for each weapon? I doubt they were generated by hand.

EDIT: I'll add some more information. For example, in Arm's Law page 11, the attack table for the broadsword is as follows: 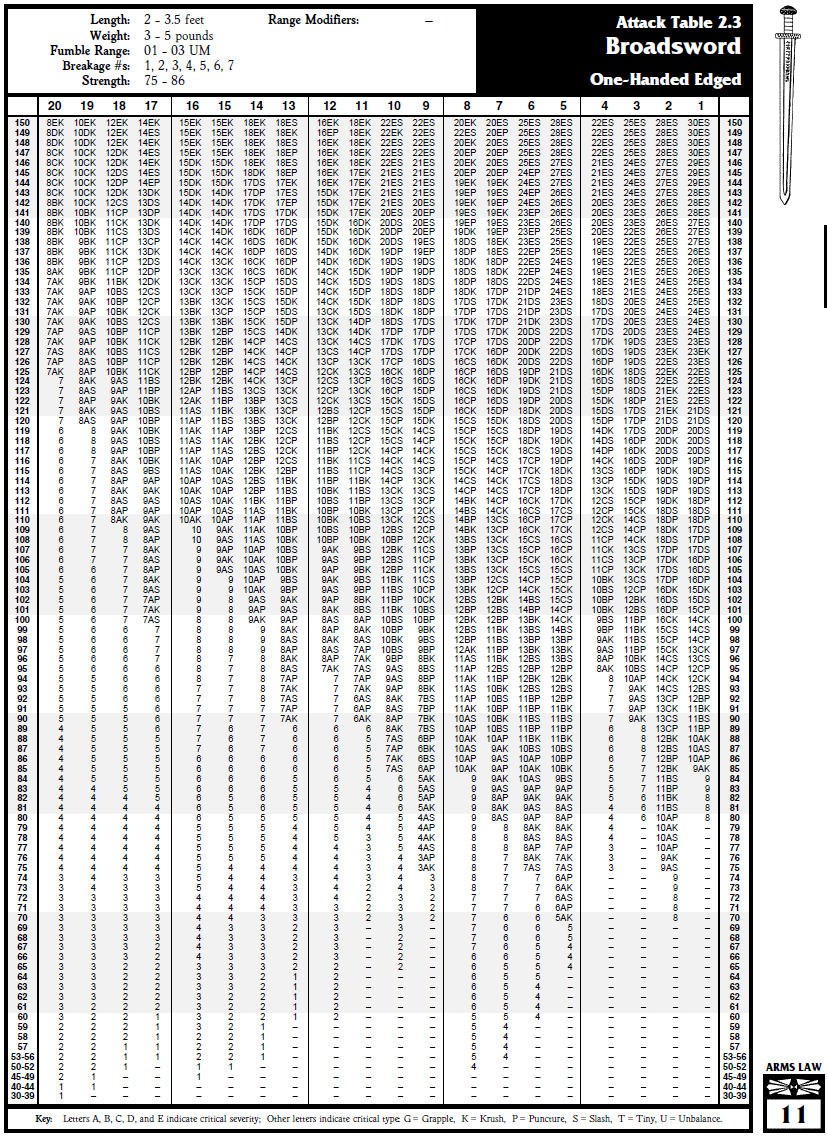 I've never seen any official statistics or formulas for the Rolemaster combat tables, if they did exist I'd be amazed if they gave them out as it would negate the need for Arms law. However the newer versions of Arms Law do streamline the process a little by grouping blocks of numbers.

In the classic Rolemaster Companion's there were several attempts to streamline the book system of RM to simplier single-page affairs.

Rolemaster Companion III (ICE #1700) presented a system where dice rolls were used and a modifier for armour was made; for example:

Make a d% open ended roll; add and subtract OB and DB as usual. Rolled dice are then used to generate damage and multiplied for a high roll.

Rolemaster Companion I (ICE #1500) has more of what you're looking for, although it's a bit intimidating. The Condensed Combat System attempts to recreate the tables with a formula system. 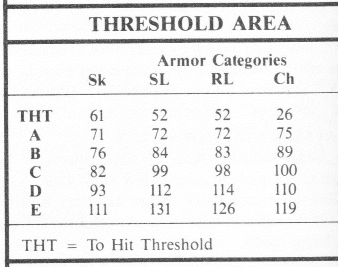 Let's try a worked example everyone!

Bob the Orc has a Falchion and an OB of 95, he attacks Eric the Thief who has a DB of 25 and is wearing chainmail (AT 13). Eric isn't parrying because he's been distracted by a malevolent moose.
Bob rolls a 50 to attack and the GM gets out his slide rule.

Comparing this to Arms Law for Bobs attack value of 95+50-25 = 120 = 17 C Slash
Not a bad approximation for this highly scientific comparison!

The full table I'm not going to print as that's taking copyright too far, but you can pick up a copy of RMC I for about £15, it's also on drivethru RPG for $15.

Rolemaster was first published in 1980. For all you millennials out there, 1980 was near the end of the "dark ages" when computers were the size of cars and kept in specially air conditioned rooms and attended by a strange priesthood of computer scientists who performed elaborate rituals to keep them operating. There were desktop computers but these were still essentially toys still awaiting the "killer app" (which, by the way, was VisiCalc the first spreadsheet).

While you cannot prove a negative: it is more likely than not that these were generated by hand according to the algorithm in the designer's head.

That said, you could certainly derive a mathematical equation for the table. It is extremely unlikely that this equation will be simple. It will almost certainly look like the equations of a geocentric astronomer trying to deny the sun is at the centre of the solar system.

Build a lookup table - it will be easier.

Looking for an xls version of the combat tables I found a revised version from The Guild Companion's issue of May 2002:

The goal was to find a solution for two well-known "armour anomalies", the relative ineffectiveness of lighter armour types and the "double penalty" (early concussion damage plus Quickness penalties) associated with heavier armour types.

For example, the new much reduced broadsword table would be:

The tables operate in much the same way as the regular weapon attack tables. The armour types are listed in columns and the results are derived from the standard OB - DB calculation. However, instead of giving an entry at each individual number up to 150, only intervals of when concussion damage and criticals occur are given. Each number listed within the tables along the critical severity type (A-E) rows indicates the minimum number needed to achieve that critical severity. Concussion damage is calculated by subtracting 75 from the final result of the OB – DB calculation and then dividing this result by the divisional factor 'Div'. The calculation of concussion damage can also be tabulated by referring to the Concussion Damage Calculation Table.

And an example of use:

Looking up the result of 112 on the revised Broadsword table against armour type 1 would yield the following.

It's not exactly what I was looking for, but it's a very good approximation :).

Not the answer you're looking for? Browse other questions tagged combat rolemaster rolemaster-standard-system rolemaster-fantasy-roleplaying .

8
What are the differences between the first and second editions of Rolemaster?
6
How do Cancel type spells work in Rolemaster?
6
Migration from MERP to Rolemaster
5
Starting kit in RoleMaster during an unusual start
4
Awarding Experience in RoleMaster
6
Tree-like abilities system for Rolemaster
10
Are there (detailed) rules for mounted combat?
8
Scaling encounter difficulties in Rolemaster
9
Can the Rolemaster 'Lofty Bridge' list spells be cast on unwilling targets?