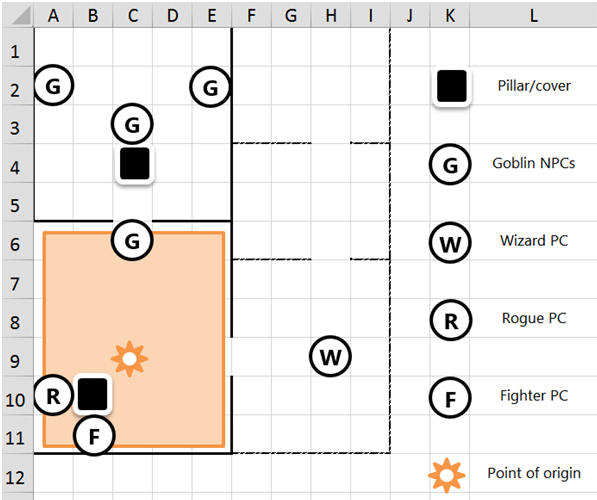 Three PC ("W", "F" and "R") shook off the goblins that were chasing them. The Goblins are looking for them in the room North of where they took refuge. One of the goblins opens the door to where two of the player characters are hidding. The Wizard PC, who went ahead to explore the room to the right, overhears the goblin opening the door, encourages his mates to take cover and throws a Fireball spell in the middle of that room (C-9).

My understanding of the rules is that:

In the example above, the spell’s area of effect is enough to fill the entire room and spill to F-9(not drawn on the map above, my mistake). As a consequence, 3 characters are located within the Fireball’s burst radius: - the goblin in C-6, against which the wizard ought to roll a dice against and who does not benefit from cover of any kind, but also, - the rogue and the Fighter who are literally caught in friendly fire: they aren’t entirely safe from spell’s effect but at least get some cover from the pillar in B-10. The action is resolved by the wizard having to roll against them but has to take the cover into account (-4 in that case).

Thank you very much for your help.

1) The wizard needs line of effect.

4) The wizard would be included if he was in F9.

As mentioned, F9 is included in the blast because it is both in range and in line of effect. I'm pretty sure Fireball targets all creatures in the burst, and the wizard is (presumably) a creature, so he would be affected by his own fireball. Note that including yourself in burst/blast attacks is something you would occasionally do on purpose, such as when rocket jumping or in a dragonborn rebreather build.

When making an area attack your chosen origin square must be within "line of effect" from you not "line of sight". [DDI] And when determining cover for area attacks you do it the same way you would for ranged attacks except the origin of the area effect is used as the attacker's square, and creatures don't provide cover. [DDI] This means that you pick a corner of the origin square and attempt to draw lines to all the corners of the square the target is in, if all four lines are unblocked they have no cover, if 2 or 3 lines are unblocked they have cover, if only 1 line if unblocked they have superior cover, and if all the lines are blocked they can't be targeted. [DDI]

So currently both the fighter and rogue have cover since there are 2 unblocked lines you can draw from a corner of the origin square to the corners of their squares and the goblin has no cover.

If a PC were in A11 there would be 1 unblocked line between a corner of the origin and their square so they would have superior cover.

If the Wizard were in F9 they would be in the area of effect and have no cover so they would get hit by their own fireball.

If the Wizard were in G6 he would not be able to use fireball on C9 because there are wall blocking their line of effect.

Not the answer you're looking for? Browse other questions tagged dnd-4e spells cover .

12
Is there a saving throw for forced movement over unrevealed pits?
2
Targetting empty squares for area burst attacks?
3
Does Arcane Reach work through walls
4
How to have Goblins Spring Out of Barrels
3
How can I tell a creature occupying more than one square is affected by an area spell?
5
Does firing a ranged weapon through a doorway give cover?
12
Is a spell's area set before damage is applied?
21
Does the Fireball spell ignore total cover?
24
Will the effects of light shine through glass?