Is there any known limit for how many dice RPG players are comfortable adding up?

After reading a few RPG systems that use successes and others that use dice whose shown number are totalled, I came to the conclusion that personally I prefer adding up a maximum of 3–4 numbers and don't like having to add up more than that — while with counting successes I had no such preference on a limit.

Now what I'm wondering is, if there are any known studies from the gaming industry (or if there is any known census there) that shows a practical limit at which the average player says "ok that is too many dice to add up" and thus loses interest?

(To clarify, adding up 3d6 in this context means adding up the face values to get somewhere between 3–18 as a sum.)

So, I am a freelance game designer and I’ve worked on a couple of systems and with a couple of design teams, but I am a “professional” only in the strictest sense (I have been paid for my game design work). I still have a day job; I do not spend all day, day in and day out, working on game design, and that matters.

But this isn’t the concern that game designers I have worked with have had. Players will, particularly in the right moment, be perfectly willing to add up large numbers of dice (some players even especially like doing so). The real concern is what sorts of mental mathematics you can rely on players to perform reliably, quickly, and accurately. You are quite constrained in what you can do before one or more of these starts to suffer, and they are all important to keeping the game moving and ensuring your game functions as you intended it to. If you ever do reach some limit where people just don’t want to sum that many numbers, then you are way, way past the point where speed, accuracy, and reliability are all solid, so that’s what you should be concerned about.

The other advantage here is that people’s ability to perform mental math quickly, reliably, and accurately is 1. quite objective, and 2. of considerable interest outside the RPG scope. This means that there is research you can leverage to answer this question. A study of what RPG players are, on average, comfortable with, would have to be very large to be valid, and would be of minimal interest outside the RPG industry. I am not aware of any such study, and truly doubt it exists or ever will. (And if it ever does, that kind of market research is often not made public, but rather produced specifically for the publisher that funded it and kept as a trade secret.)

The rules of thumb that I have kept to include:

You can do a lot more research into this, though. These rules of thumb are just things I have picked up from working on things with game developers I respect, as well as some things I remember from my undergraduate psychology courses. That’s good enough for me, and I suggest that these are issues you want to stay well inside the lines, rather than toeing them on, but ultimately, you can definitely find more information out there about what sorts of things do and don’t work.

From observing a lot of players since 1979, adding smaller numbers is significantly easier than adding big ones.

Mechanics that have been produced to avoid arithmetic, such as Storyteller's pools of d10s, or the sorting involved in One Roll Engine, have just as much potential for mistakes, although they may be easier for people who have convinced themselves they have a problem with arithmetic.

All of this is for dice rolls during play. More complicated rolls during character generation, or downtime, are possible if the GM will be available to help with the process and there won't be time pressure.

It depends on several things, how many dice are comfortable. One of the most relevant points on the pool size is: Do you need to roll at least a specific sum with the dice pool or does each die above a certain number count towards a success? Let's type these two systems A and B, take into account the odd "Roll & Keep" as C and add an Excursus on exploding dice.

A - Sum vs. Difficulty to Success

This is somewhat the D&D and GURPS way. Roll a specific pool, add a modifier, compare the sum to some "difficulty" to determine success or failure.

Clearly, pools that sum up to success have to be limited to be handleable, and KRyan made an excellent analysis on how the numbers play for or against each other here, though I would like to add some tiny bits:

B - Dice above X are (partial) Successes

An entirely different way to achieve a solution is yet untouched. We encounter such a system in games like Shadowrun, Exalted, the WoD/CoD and others:

There is some way to determine a pool size (often either some sum of statistics on the sheet), modifiers usually change the pool size. Then all the dice are rolled (possibly using exploding dice mechanics) and any die to show more than the difficulty (which can be dynamic or static) is a (partial) success.

Obviously, such a system is different in evaluation time from the Type A or C "one pool, sum up, check against number". However, these systems can be faster to evaluate than summing up larger dice pools and they do allow having a higher pool while maintaining the same number that should show up on a roll to be a success for every roll: it is possible to get a six with 1d6 as well as with 6d6, however, the probability in the latter case is better.

There is a point, when a dice pool against a fixed numeral almost guarantees at least one success (or rather a 98% Probability). Let's look at the old Exalted 2 in anydice. Any roll of 7 or greater is a success, 10s are two, 1s count as -1 success. Now, with a slight modification of it that only checks if there is at least one success. A pool of 6 dice does grant 95.33% of success, 7 dice 97.2% and 10 dice go to 99.4%. Any more dice and we skew heavily towards 99.9+%. Obviously, these tasks have become trivial for a character that can muster such a pool. For 2 successes needed, the point of >90% is at 11 dice (91.99%), which is also the very last result anydice can handle in 5s. Careful estimation of mine: for a >95% chance for 2 or more successes, one would need somewhere around 12-14 dice (double of 6/7).

This type I have encountered to date only in one example: Legends of the 5 Rings. It is a dice system that in itself takes some of A, gets inspired by B and does its own thing.

In L5R you roll a number of d10 based upon two static values on the sheet (skill+something), then keep a number of those based upon one of those (often the skill) and sum those kept dice up. It is possible that after that you have to add some other static value to this number. The end result is compared to some difficulty, which usually is a multiple of 5.

The problem of this system is evident easily: summing up many dice (L5R allows only up to r10k10) can become pretty slowsee below and everything that is true for the A part is true for this. Obviously one has to limit the dice pool to achieve any handleable results but this progression also does grant very interesting results: the more dice enter the pool, the more spiked a small keep becomes towards the high end, and keeping more does make it more bell-curvy and shifted towards the average sum of all dice rolled while the sum as a whole rises. How does this look like? Well, without any additional external modifiers... like this anydice - shifted bell curves all over! Or we look at the good article on the Roll & Keep.

It doesn't help, that even overachieving a target by a lot does not alter the outcome in this system, but that is not relevant to the dice comfortable question.

Exploding dice like SR2 & SR3 had them are somewhat awkward: You can get oddly high results, like rolling a pool of 2d6 and scoring a 23 and a 7, but if the number to beat with each die is rarely ever going to be that high, it is just a complication.

While Exploding dice are clearly a mess, they do allow extreme results: even if a 35 on an exploding d6 is quite improbable, it can happen \$(2.1\times 10^{-5})\$ - it grants the chance to do this once-in-a-lifetime, one-shot dragon-kill... At the price of considerably slowing the rolling process once it happens, as this example roll would need 6 explosions.

A different example of exploding dice can be found in Mekton. This system bases on a simple 1d10+derived value (from a skill and a basic statistic). The die explodes on a 10 and continiues to do so as long as 10s appear. On the other hand, if the first die is a 1, it explodes negatively once: you deduct that extra roll, but this one doesn’t explode on a 10. The resulting distribution is this, clearly favoring the 2-9 area, disallowing 1 and 10 (&20) as expected for exploding dice, and any really extreme results are very rare.

WoD features in some editions a somewhat exploding dice (if you have a specific trait), granting an extra, additional die. The 20th Century edition threw this out and turned 10s into double successes.

As these thoughts are by far not a mathematical proof, I did a practical survey in my college RPG club. This survey started with 2 (and a half) people going through it, so it does not qualify to be a statistically valid test as of now.

Participants have 60 seconds to solve as many questions per column as they can. The columns are:

The Test Sheets are arranged in columns with an empty line as a placeholder for the answers, the correct answers are calculated by the computer and provided in the very same print-size, allowing to quickly to check the answers against the correct results. 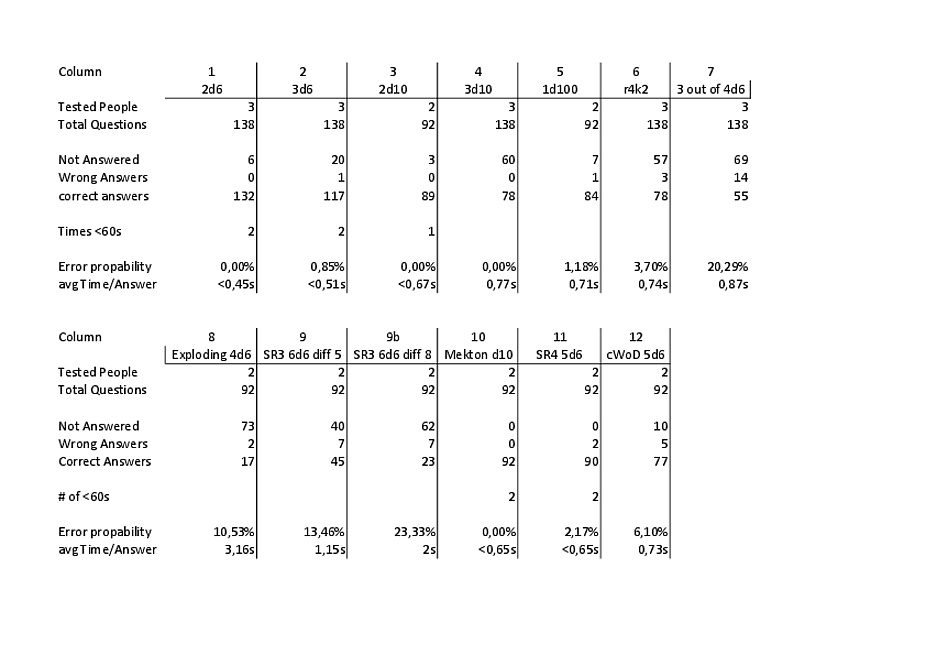 Up to now, the number of participants is too low to grant fundamental results. However, there are first indicators for some points worth of notice:

Not the answer you're looking for? Browse other questions tagged dice game-design .

71
What dice mechanic gives a bell curve distribution that narrows and increases mean as skill increases?
1
Creating a map for a West Marches campaign

8
How are a dice pool's probabilities affected by being allowed/forced to add dice then drop high/low dice?
14
Is there any known reason for the seeming paradigm change for the number of skills?
11
How to create dice rolls for multi-attacks in a custom tabletop RPG system
6
How to count the number of successes in a very large dice pool more easily?
25
What is a decent dice rolling strategy for partial/half advantage?
7
Adjust difficulty without affecting character's capacity, without adding steps to assess result, for a dice pool with unvariable target system