How can I make a check half as likely to succeed?

I've used my own homebrew system a lot, and recently began making a spellcrafting system. One effect I want aspiring mages to be able to load essentially stuns the target while still allowing them to do any activities they usually do, but making them only half as likely to succeed on reflexive actions (such as defending and dodging) they take under this effect.

Assuming I roll d20s to make these checks, how can I make them half as likely to succeed in most circumstances? (See below for details.)

I don't just want to subtract from the target's rolls or raise DCs because that might make taking the action at all impossible (though it can work with other methods, and ultimately may be required). Using coins isn' t the answer I am looking for. Anything else, though, barring random decision by a human, is fair game. Bonus points for some sort of flavor.

Conditions to be satisfied:

Flip a coin, subtract 20 if tails

So let's throw some math in there.

The 40 in the denominator would suggest we need a d40

Of course, a flip of a coin can be simulated by rolling a die with an even number of sides and considering the even numbers as head. (Or the even numbers tails. Or, you could go anything above \$ \frac {die size} 2 \$ as heads/tails.)

If you want to get rid of the coin flip (or second die roll) you could tie the two together. This sacrifices some of the precision, but leaves you with only one die to roll.

Of course, sides with the same number can be merged, giving: -19, -17..-1, 2, 4..20. There are two ways you can get exactly this result: subtracting 20 if the number is odd or multiplying odd numbers by -1 (i.e. make them negative). The first way keeps the sum of opposite sides constant (giving numbers that are slightly closer to truly random) but the second way may be easier on you and the players. Pick whichever one you feel more comfortable with.

Of course, we manipulated the chances a bit when we changed its sides. But how much did we change the chances? Negative even values can't be rolled. That's why, if the the shift will be slightly difference between the true half of the original chance. The same goes for odd positive values. Basically, in each of those cases the \$DC - bonus\,\$ is the same as either its value plus one. The chance will never be shifted more than 1 out of forty = 2.5%, so that's your inaccuracy. No check that was previously possible to make has disappeared, because the only chance that was at risk of that (DC-skill = 20) has the 2.5% shift in the player's advantage, staying at 5% instead of halving.

So that's it, you can either use an extra coin flip (or dice throw) and get complete accuracy on halving the chances or use only one dice throw and accept a rounding error of 2.5% in half of the required values to throw.

To halve success probabilities make the roll as normal; if the result indicates success then flip a coin,* and if it comes up tails the roll fails.

This works for any combination of dice, with any modifiers, for any probability of success.

The probability of failing any given roll is:

Note: that "make it 50% less likely to succeed, or in other words, twice as likely to fail?" is actually a non-sequitur because success and failure probabilities are bound by the relationship:

The only probability of success for which "make it 50% less likely to succeed, or in other words, twice as likely to fail" can be true is:

For all other success probabilities, the sum of halving success and doubling failure probabilities will not sum to 1.

Roll a d40 instead of a d20, and subtract 20. That way you double the space you're selecting from, while leaving the number of successful slots the same.

First of all, we need to look at the success rate, as we can't multiply a factor 2 towards the failure rates: you will easily acknowledge, that multiplying a 70% failure chance \$f\$ by two gives a 140% chance of failure, which is not a valid argument.

starting at the dice: looking at success chances

calculating the half success chances

The most easy way could be approximation: just round up the DC. This gives us a nice thing to show in a graph: we expect the light blue graph, but we get the orange one. Maybe this is good enough, but it is a shift not favorable for the players - they loose 0.5 all the odd rolls. 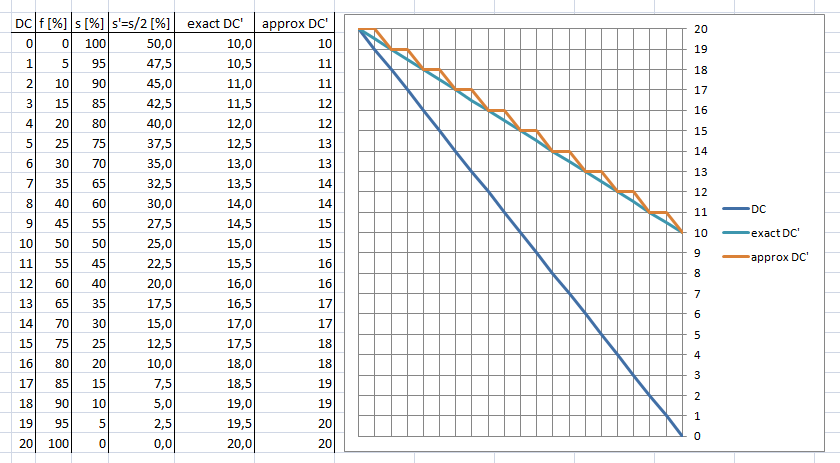 Taking a look back at the formula above we see there a very interesting one:$$s_{(n)}'=s_{(n)}\times 50\%$$ This can be very easily modeled, as "\$\times 50\%\$" is nothing different than a coin. So just rolling an additional die with a DC11 and checking this one if the other die is voided would would give an exact remodeling of the deired DC'. Also, this simulated DC' can be extended for rolls that would be trivial otherwise, as the system does work with degrees of success: a task that would be graning the 200% class usually still gives a "no need to roll" 100% class. 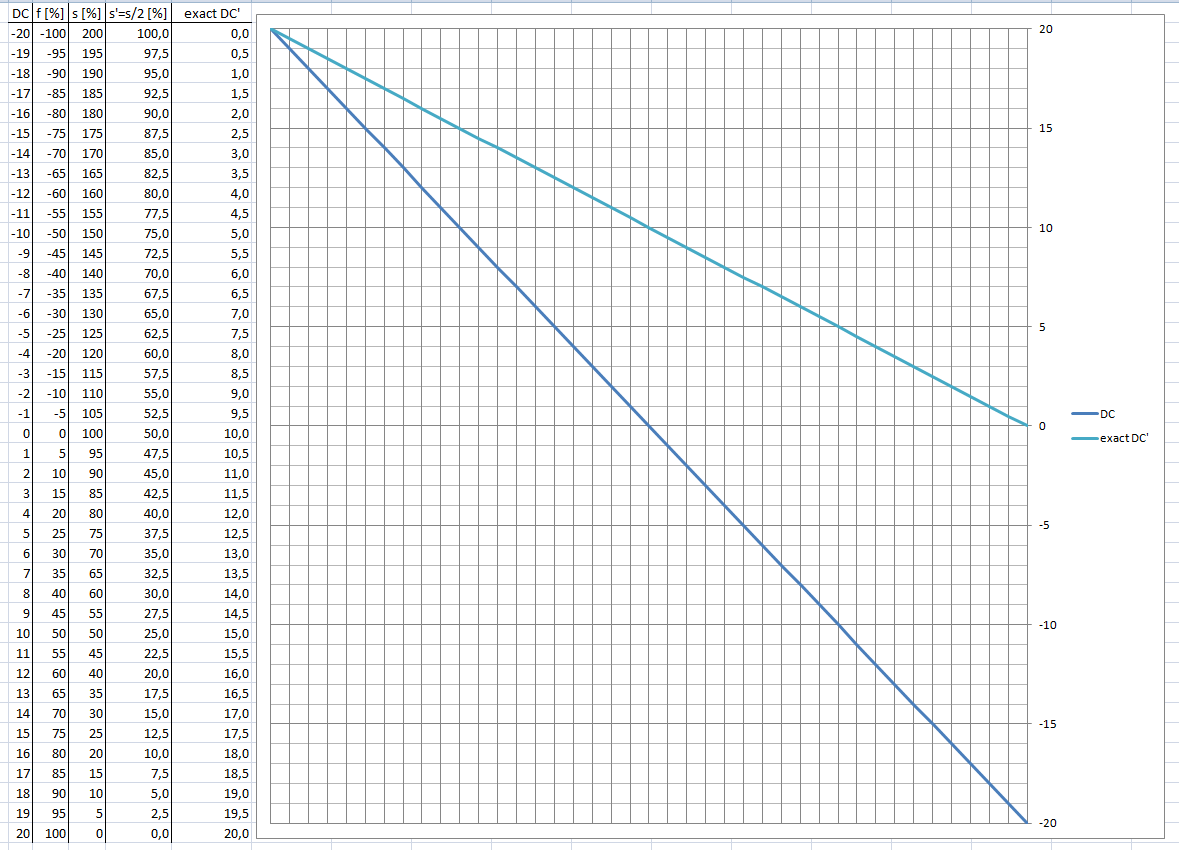 However, this is not compatible with the tenet "no altering of the DCs".

We are already going to mathland, so we could very easily switch to a better suitable dice: multiples of d10. These can model anything that can be expressed in %:

That is better, but maybe still somewhat awkward... So, maybe a better solution:

switch the base die, so there is a half die that is available

Ok, we started to throw all the rules into the wind, so let's try to go back and get at least one rule back to the board: we don't want to need to recalculate the DC!

Now, we want to keep the DC. To do this we have to change a very large detail: Success is not determined by rolling over a specific number, it has to be rolling under a specific target number. The best result would be a 1 now, the worst a 20.

keep the dice, change the DC and fiddle with "coins"

We know for sure, that the only possible modified DCs should be results that can be modeled as \$DC'=n\text{ or }DC'=n+0.5\$, because we only allow dividing by 2 once.

So, we could reasonably provide a table like the one we already saw (Table 2), and alter the DC accordingly. Now, instead of rolling 1d20 with DC11 (which simulates a coin) first to check if we succeed, we roll the DC against the DC'. If DC' is a Natural number, proceed as normal.

If DC' is n+0.5, we have exactly one case, where we have a problem: When the d20 shows exactly the number n. Now the most simple solution is a coin: we just roll the die again with DC11, taking the total success or failure based on that last roll. This simulates adding a 0 or .5 to the only result where this matters: the breaking point. And it reduces unnessecary clutter on the table.

Surprisingly, this will show exactly the same behavior as above, BUT it reduces the cases where extra die rolling is nessecary to exactly one case. However, again, we couldn't keep the DC the same. But at least the dice and no approximation!

As the question doesn't disclose the exact method of the rolling system, it might not be possible to solve this problem better at this time. However, there are solutions based upon better-suited dice or other revisions of the dice system. Revising the rolling system to incorporate one idea is not pleasent, especially if some tenets can't be upheld in the process. One can only do so much:

This solution only works when the chance of success is less than 1.

There are statistical anomalies if success is rare to begin with: If only results of 18, 19 or 20 would succeed, then this reduces the number of successes by one third, not half. In most cases these deviations are fairly small.

Bob is making a check with a success probability of 50%. You change the DC to 76, a 25% probability.

Joe is making a check with a success probability of 20%. You change the DC to 91, a 10% probability.

Let \$DC\$ be the difficulty of the original roll and \$bonus\$ be the bonus to it.

The calculation is not that difficult, but players adverse to arithmetic are likely to not enjoy it. It is trivial to automate if one has any programming experience. Note that it only depends on the difference \$bonus - DC\$, or (equivalently) on the difference \$DC - bonus\$ if one uses the formula \$(21 - (DC - bonus)/2)\$. Another equivalent way would be to calculate \$(20 - DC + bonus)/2\$ and round up.

I would recommend using some simpler solution; exactly halving the chance of success is unlikely to be that important when compared with playability.

I.e. use the rotation of the visible face as a 50% failure rate on your successful rolls, but account for the fictitious "greater-than-100%" success rate you want to preserve.

Perhaps I am missing something, but it seems to me that this can be resolved by applying disadvantage to the rolls in question and making them "flat-footed", to use 3.5E terminology. I would word it as follows:

The target gains disadvantage on all saving throws and opportunity attacks, and cannot benefit from their Dexterity bonus to AC. If the target attempts to perform an action that would otherwise apply disadvantage to their roll, that action fails automatically.

It doesn't actually make the success rate a straight 50%, but this would fit within the existing framework of rules and it's simple enough that your players wouldn't have to spend five minutes learning what is happening. Moreover, it won't require the coins that some other (very good) answers are recommending.

Roll the die. It can only succeed if the number rolled is even

1/20 is the lowest partition of probability you can have on a d20, you wouldn't be able to divide that up further anyway. Basically you're halving their odds of success, rounded up to the nearest 20th.

Use another roll, such as percentiles, before the check is made, to repesent something beyond their control

For example, the spell can randomly "shock" the affected creature - before doing a check, make a percentage roll - have a 50% chance that you they a shock and the check auto-fails.

Otherwise its unfair - a character who is "good" at that kind of save is being short changed.

Not the answer you're looking for? Browse other questions tagged dice statistics conditions .

20
How can one make a DIY "Silent Dice Tower"?
17
How likely is success in Dungeon World?
5
How can I calculate the probability of being able to purchase a card in my custom die system?
1
How likely is to roll elite array or better with 3d6 in order?
7
How can I calculate the probability of meeting a certain Difficulty Value on 3d6 with critical success/failure modifiers?
12
How can I ensure my dice roll fairly if they appear to have a bias?
7
How to handle degrees of success in roll under systems
6
Does increasing the dice pool make messy criticals more likely?
5
How can I compare the dice ranges for my game features to understand the minimums and maximums?