Is it possible for books used as weapons to overcome damage reduction? [closed]

I want my character to use books as melee weapons. But I'm concerned about overcoming damage reduction.

Is it possible to make a book out of a special material such as cold iron, adamantine, or alchemical silver; or to modify an existing book to add a metal cover, such that it would overcome damage reduction when used as a weapon? How much damage reduction would the various material/book types do? If it helps my characters tend to be non-literal bookworms.naturally they would have a habit of using books as weapons.

Related: How much damage do books do as weapons?

The rules only provide for adding these metals to weapons that are already made of metal. Fortunately, Complete Arcane has costs for spellbooks with covers of "Metal, hard" and "Metal, soft" on page 140. (Thanks to KRyan for the citation.) If you're using one of these spellbooks as your weapon, you can then follow the Special Materials rules as normal to get the price for masterwork, magic, silvered, adamantine, or cold iron spellbooks.

Well, I doubt a blacksmith would have the know how, or the experience to silver a book (however that would work), you could instead attempt to to rebind the book, using either a metal overlay or merely stud the book in the required material. This would satisfy both the gold cost, and the logical approach that the metal must contact the foe. Example: 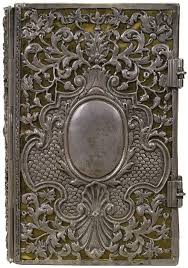 A book the size of a spelllbook could conceivably be considered a small improvised weapon. I've ruled this in the past to be a 1d3 weapon for a full spellbook, or a 1d2 for a traveling spellbook. Additionally, since the book isn't designed for this kind of treatment, doing so deals the book 1d3 damage each time it hits.

As to special materials... this I haven't encountered, not like you're describing. If I had to make a ruling, though? I've always had a house ruling that cold iron is anathema to magic, thus you can't make a spellbook out of it. No reason silversheen wouldn't work, though. Likewise, actually making the book out of silver would make it heavier and cost a lot, but would give it the alchemical silver traits. Again, though, these are house rulings, so YMMV.

Not the answer you're looking for? Browse other questions tagged dnd-3.5e damage improvised-weaponry damage-reduction or ask your own question.

5
How much damage do books do as weapons?

10
In Pathfinder, do magical weapons automatically overcome damage reduction?
12
Does Diamond Spray bypass DR/Magic?
7
What overcomes “DR 15/cold iron and magic”?
5
How much damage do books do as weapons?
6
Break DC too low?
3
Can you voluntarily suppress the effect of a continuous magic item you are wearing?