What happens when stepping sideways?

Planning a 20A edition OWoD game and creating an ambush from some Garou. Simply put, the old "wait in the Penumbra and go jack-in-the-box when the enemy is in position" gag. So my question is what happens when stepping sideways? Are there any sensory cues? How long would/should/could it take?

System: To step sideways, a werewolf needs to meditate on a highly reflective surface, such as a clear pool of water or a mirror. When a character attempts this, roll that character’s Gnosis; the difficulty is the strength of the local Gauntlet. The Gauntlet is strongest near certain types of environments; every place on Earth has a Gauntlet rating between 2 and 9.

Some shapeshifters cannot attempt this or have different methods for crossing the Gauntlet. The time it takes to enter the Umbra depends on the number of successes on this Gnosis roll.

Anyway, I strongly suggest you to reread the book, as it seems that you somehow missed a huge part of it.

Are there any sensory cues (within the Umbra)?

There's a whole section on peeking from the Umbra to the Earth and vice versa, see p313 of the 20th anniversary rules:

A Garou in the Penumbra can peer back into the physical world, but it’s not easy, and it’s not without risk. (This requires a Gnosis roll against a difficulty equal to the local Gauntlet.) If the attempt succeeds, the werewolf sees a shadowy, monochromatic version of the physical world. Seeing fine details is difficult (although it’s possible to read newsprint, a computer monitor, or facial expres- sions with five successes). Noises from the other side have distortion or echoes. Scent, however is unaffected; in fact, some Garou claim their sense of smell is heightened enough that they can even track prey.

While a Garou in the Penumbra is peeking into the physical world, however, she is oblivious to her surroundings in the spirit world, unless she starts taking damage (and losing Health Levels). Her pack can’t communicate with her, and her enemies can act unopposed. Her intense concentration is obvious, especially since her eyes will be glowing.

Werewolves can also peek from the Earth to the Penumbra, though it’s even more difficult. The Gnosis roll is against a difficulty of the local Gauntlet plus three, up to a difficulty of 9. However, the same dangerous distraction is evident. Fortunately, some supernatural abilities make this easier, such as the Gift: Pulse of the Invisible.

In short there are no sensory cues from the Earth while you are in the Umbra without peeking as above.

The sort of ambush you are describing is a typical move for Werewolves and works really well if planned and executed properly. It does need all the participants to get three successes when crossing over to work properly which is what makes it tricky.

Note that if your opponents are aware that they are facing Werewolves and experienced at fighting them then they won't be surprised by the attack and may even take countermeasures or set a trap.

Are there any sensory cues (for the ambush victims)?

As far as I can tell there isn't a rule for this but if the crossing isn't instant then your storyteller would probably decide that there are sensory cues wherever the ambushers are going to and that the victims would have a reasonable chance to prepare.

I was reading the Example of Play in the W20 rule book (p. 362) and it has an accompanying set of illustrations that perfectly show someone stepping sideways and peeking: 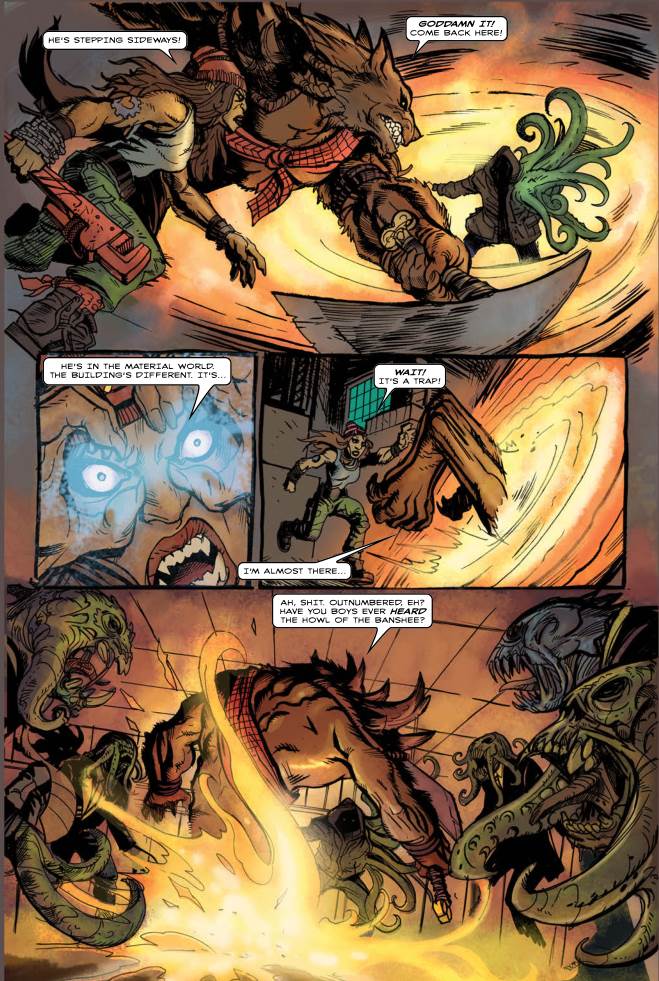 As you can see, according to this there is definitely a visual cue on both sides and as it's in the rule book we can take it as definitive...

Not the answer you're looking for? Browse other questions tagged world-of-darkness werewolf-the-apocalypse werewolf-20th-anniversary umbra or ask your own question.