Clarification on Reach vs Threaten range

I'm a bit confused with how to put together reach and threatened squares. A character has a natural reach range of 5ft around it, meaning I would 'threaten' the immediate vicinity in the "x"s:

Specifically with the white haired witch archtype, it states:

"At 1st level, a white-haired witch gains the ability to use her hair as a weapon. This functions as a primary natural attack with a reach of 5 feet."

does that mean I maintain the original threat range of 5ft like the example above, or does that extend my threaten range to the surrounding squares, indicated with the "X"s?

With the Prehensile Hair hex, it states:

"The witch can instantly cause her hair (or even her eyebrows) to grow up to 10 feet long or to shrink to its normal length, and can manipulate her hair as if it were a limb with a Strength score equal to her Intelligence score. Her hair has reach 10 feet,"

Does this mean the threat range would look like the example above, being able to reach and threaten all "X" and "x"s?

At the 4th level, the WHW archtype gains another 5ft to its hair range, which would mean it has a total reach of 10ft at lvl 4.

"At 4th level and every four levels thereafter, a white-haired witch’s hair adds 5 feet to its reach, to a maximum of 30 feet at 20th level."

My confusion is partially stemming from reach vs threat range, and how the word "reach" is used these abilities. Particularly because the WHW defines it as haveing a reach of 5ft, which would be the natural "range" of attack already implied by the rules? Are are they just weapons that extend your natural reach to the limit defined (IE: 5ft/10ft); or these natural weapons treated as "reach" weapons, in the sense that a reach of 5ft would threaten 10ft, and a reach of 10ft would threaten 15ft.

I did notice that it doesn't state these abilities take penalties attacking within 'close' range as well, like most reach weapons have. This is also assuming the character is medium in size. I do also know that you can increase your "threaten" range beyond your "reach" range via feats, etc, and that the two ranges can differ.

Mainly asking this for clarification because I can't really seem to find anything specifically pertaining to this subject (I already have a general idea of what would happen, just wanting to cross-check to make sure it is correct). 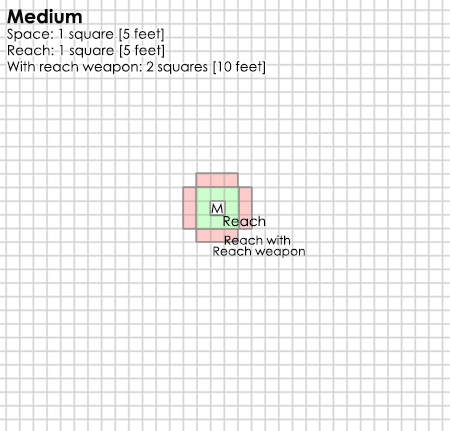 At 1st level, a white-haired witch gains the ability to use her hair as a weapon. This functions as a primary natural attack with a reach of 5 feet.

At 4th level and every four levels thereafter, a white-haired witch’s hair adds 5 feet to its reach, to a maximum of 30 feet at 20th level.

Obviously, folks laugh at high-level white-haired witches that lack both a high Dexterity score and the feat Combat Reflexes.

The witch can instantly cause her hair (or even her eyebrows) to grow up to 10 feet long or to shrink to its normal length, and can manipulate her hair as if it were a limb with a Strength score equal to her Intelligence score. Her hair has reach 10 feet, and she can use it as a secondary natural attack that deals 1d3 points of damage (1d2 for a Small witch).

Note: Because these distances are set by the special abilities themselves, their specificity trumps the more general rules about reach. For instance, a Medium white-haired witch shouldn't see its white hair threaten an even bigger area if the white-haired witch is the subject of an enlarge person spell (although such a witch will see the area threatened modified due to the white-haired witch occupying more space for the spell's duration). However, a generous GM may rule otherwise.

A reach of 5 feet is the same as a normal melee attack. Logically speaking, you can't reach something 10 feet away using the hair attached to your head if your hair were only five feet. I feel like they tried to clarify the distance, but because combat doesn't describe a reach of 5 feet, it's more confusing than intended. Starting at fourth level, the WHW's ranges increases to 2 squares away, and increases every fourth level thereafter, making them pretty decent at "ranged" attacks as they increase in level.

The only "reach" they describe in combat is the "reach" weapon special ability:

Reach: You use a reach weapon to strike opponents 10 feet away, but you can't use it against an adjacent foe.

This suggests that the reach of 10 feet at level 4 is intended to be as threatening as a long spear, but with the ability to also attack a target that's adjacent to you (natural attacks can generally attack anywhere within their maximum reach).

Not the answer you're looking for? Browse other questions tagged pathfinder-1e combat .

4
What attack rolls does a TWF 3 Rogue/1 White-haired Witch get?
6
Can creatures attack anything within their natural reach?
9
When using a reach weapon, which squares around me can I attack?
5
Can a white-haired witch grapple multiple targets?
3
How is reach interpreted in the Bestiary?
8
AoOs against the same enemy on his turn?
11
Do creatures with inappropriately sized reach weapons threaten different areas?
3
Combining Natural Reach and Weapon Reach
7
Can this Monk Witch Grapple and then Pin at a distance in one turn?
2
Notion of adjacent and natural reach for large creatures or more