What exact dimensions does a physical cone AoE template need to have?

I am trying to get a precise set of measurements for cone-shaped areas of effect so that I can craft a physical template to use as an overlay when playing with miniatures. I want to get it right the first time.

The problem is that the rules for the shape of a cone AoE aren't very precise, and when you start looking at them closely, there are a bunch of inconsistencies. These are “good enough” when playing without a grid, or when only needing a grid-shaped approximation of the area of effect, but they are causing me difficulties with crafting an accurate physical template.

There are three incompatible interpretations of the maximum length of a cone (PHB, p. 204; emphasis mine):

A cone's area of effect specifies its maximum length.

… which each lead to slightly different template constructions (using a 30' length as the working example):

The problem is that the rules for the shape of a cone AoE aren't very precise, and when you start looking at them closely, there are a bunch of inconsistencies.

I disagree. It is clear what precise shape they describe, and it is the simplest way to describe and use a cone area of effect in this game, particularly given (but not limited to) the game supports the use of a grid and miniatures. It is quick to use, easy to understand, does not require a calculator or trigonometry, is difficult to argue about and you can draw it easily on any scale.

The rules as written:

A spell’s effect expands in straight lines from the point of origin.

There is also a picture on that page showing the shape produced.

Explaining how these rules work together, the process to follow when defining a cone area of effect is:

Option 2 and option 3 are definitely not what the RAW describe.

As to encouraging players to cast "off centre", yes of course. A player will probably set the orientation of an area of effect to maximise the number of targets whatever the rules are. They will do it to reduce the amount of unwanted collateral damage as well.

As a related aside, it is important to remember that a grid (if used) is a meta-game guide and does not exist for the characters in the game world in any way, so there is no "correct" orientation for them, just the one that reaches/effects the desired target(s).

DM judgement is required when the cone is not cast parallel to the ground or if the ground is not flat. The DM will have to adjudge what is effected but I strongly suggest you avoid too much discussion and definitely avoid calculators and trigonometry. It should be done as much as possible "by eye" and what is fun and good for the game rather than what is exactly precise. The DM should use the following rule to decide if any parts of the area of effect are blocked:

Let me quote the first sentence of the Cone description:

A cone extends in a direction you choose from its point of origin.

Whichever way you go, the purpose here is to decide whether or not a given target is inside the cone. If you are using the optional grid rules from DMG 250, then all of your math is rounded to the nearest square. In any of your options, the margin of error is about half a square for the 30' template. Coincidentally, the margin of error for DM judgement is also about a half square.

If you're still having trouble deciding, then my suggestion would be to cut out (or draw in a CAD program) the actual candidate arcs and overlay them to see how different they actually are. I think you'll find the difference is minimal.

Finally, remember that turnabout is fair play. If you do let that Burning Hands 30' cone stretch out to 33.5' at the edges, then the red dragon's fire breath will as well.

Side note: if you were to use option 2, the width at any given point along that length would still depend on that point's distance from the origin. This would result in a slightly fatter cone than approach 1.

If you use the simple geometry suggested in the PHB, this is simple.

A cone’s width at a given point along its length is equal to that point’s distance from the point of origin.

Shooting out at 45 degrees gets a bit more tricky, as the distances go horizontal and vertical, but at each distance away, if you are 6 squares out, there are six total squares horizontally and vertically from that point. 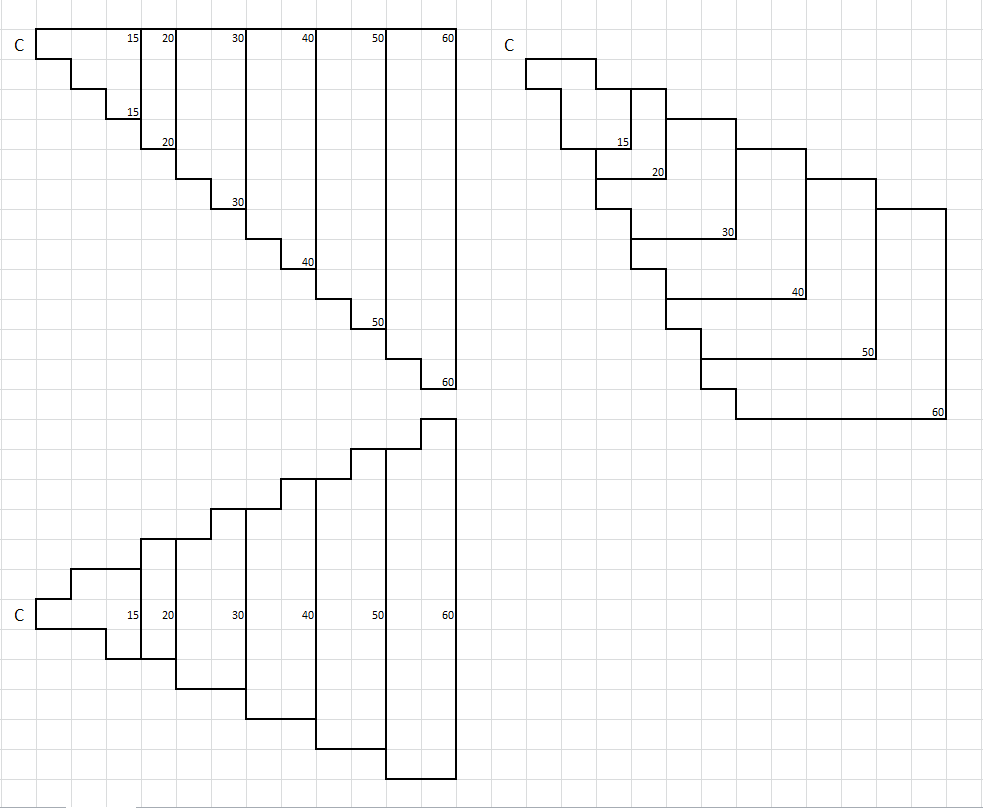 Similar to CultOfTheD20's answer, I drew a picture. The blue are 15' cones, green extending to 30' cones. No matter the angle you hit approximately the same number of squares.

Squares more than half covered are hit. Squares that are iffy fall to DM's discretion. 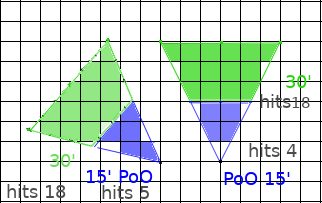 Not the answer you're looking for? Browse other questions tagged dnd-5e spells miniatures props area-of-effect .

1
How do I map cones on a grid using 5e standard distance?
21
Does the Fireball spell ignore total cover?
10
How does the size of the Gold Dragonborn fire breath weapon work?

4
Can a lake of eternal fire be created with the spell blast of flame?
4
How does orienting a cube-shaped spell work in three-dimensional space?
4
Is there a means by which to "shape" a spell?
10
Considering only spells from the PHB, are the Elemental Adept feat and the Elemental Affinity sorcerer feature only good with fire damage?
13
Is escaping from a cage-shaped Forcecage really as ridiculously easy as it seems?
3
How do I handle targeting and areas of effect in 3-D?
8
Can a Beholder include itself in its Antimagic Cone?
2
Are these homebrew attempts at recreating some blast shape invocations from 3.5e balanced for 5e? (Version 2)
6
How exactly do you calculate changing a Line into a Cone?