Tactics for Battle of Albridge [closed]

I'm currently thinking about the Battle of Albridge in my Reavers of Harkenwold campaign.

One of my players stated he wanted to have a big battle with the Rebellion troops against the Iron Circle. I thought about it, and it sounds like an extension to the "Battle Preparations" skill challenge would almost cover this, with the players discussing tactics, both sides having a number of troops (the numbers are more or less available in the module) and I having a number of tactics, like frontal assaults over the bridge, ambushes, formations to deploy...

I drew a map of Albridge, copying the one in the picture, showing a bit more of the southern part. I assume the armies of the Iron Circle would come from the South (with perhaps some troops ambushing from the East if need arises)

The bridge is a big bottleneck. The troops of the Iron Circle are mostly composed of melee fighters and some artillery, with a small number of tar devils, dark adepts, and Nazin the Warlord (an elite Soldier). What tactics would you recommend for my evil armies to use? How should I setup my troops, and how should I gain a bridge-head into the town? I don't think it's very realistic to have them deploy canoes from the rear once they get to the river side. What do you think? 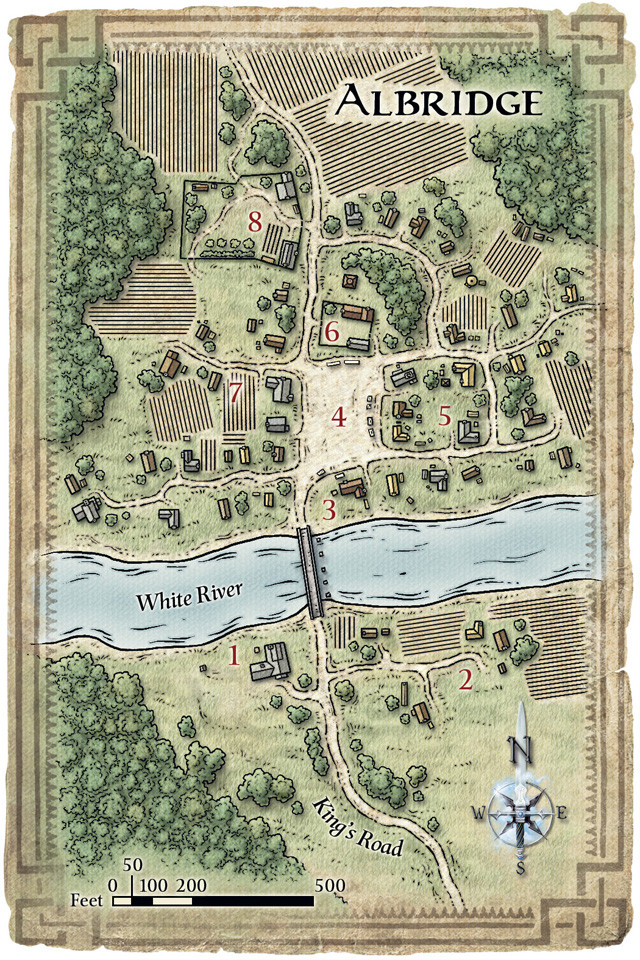 I'm sorely lacking in 4th ed knowledge, but here are some basics for you to consider:

1 - EXPOSURE: That bridge is brutally open, making it a natural murder zone if the defending force is prepared with missiles or skirmishers. Reducing line of sight to the bridge is of critical import. Consider using fire from your artillery (clay pots filled with flammables and/or greek fire, will get stuff burning but good) to create a smoke/hazard from a distance (building 3 is a convenient target). That will hopefully create a natural wall of fire/smoke to screen your crossing. Various spell effects will help you get troops across while taking a minimum of casualties.

Good use of your ambushers from the east to create a skirmish/distraction will help pull attention away from your crossing as well.

Anyway you slice it, though, you're going to have to cross under fire and into resistance. Consider pavise-style portable-cover on wheels to screen from the worse of it, or other variants on a battering ram/siege tower to cross the river if they go with missiles.

2 - PUSH OF PIKE: Once the crossing is secured from missile fire, they'll seek to deny you the physical ability to cross. Pike phalanx would be my go-to option with swordsmen mixed up among the front rank to handle anyone who got under the spears. It should go without saying that you're going to want your heaviest vanguard on point for the crossing. Think 'wrecking ball' and you're in good shape - but a slow moving one. The good news for pike formations is that they're bunched up - prime AoE ability fodder.

3 - AREA DENIAL COUNTERMEASURES: Expect them to consider blowing the bridge as a real option, especially if they're out-classed. You'll want counters to obvious spells and abilities that could damage the bridge - ESPECIALLY when your vanguard is crossing it.

4 - AIR SUPPORT: I don't know if Tar Devils can fly but if they can, or if you have any other airborne units, use that. Drop buckets of burning pitch, greek fire, whatever you can to disrupt enemy formations, break down their line of communication/sight, and otherwise foul up their day. Ideally use something you can selectively extinguish, to prevent your own forces from falling into the same trap.

5 - ONCE ACROSS: Feed your own pike wall equivalents and establish an expanding schiltron. You are at your most vulnerable when half of your forces are across, that's when a savvy enemy will hit you, and try to bust the bridge if they haven't already. If they can split your force in half they can apply their full pressure to half your strength and then mop you up. An educated commander will expect this.

6 - ALTERNATE CROSSINGS: Consult spells and magical abilities you may have available which can effect the flow of the river or its depth (make a ford). Consider the forest in the southwest as a source of wood. Log jams could be constructed or similar makeshift crossings secured. A particularly determined/unscrupulous commander could simply go for artillery-fired ropes of sufficient length and order troops to ford the river, using the rope to keep themselves above water. It's slow going and low through-put, and losses will be heavy but See Also: Evil. :P

7 - ARTILLERY SUPPRESSION: Consider parking artillery on the near bank and using it to suppress the far bank. While completely anachronistic, it should be quite effective until they can silence your battery. The idea is to smash stuff and make fire and generally convince defending archery that its better if they just pack it up and go home. :)

I re-wrote these encounters as well - some of it is documented here on rpg.stackexchange.com:

As with your group, they decided to try to hold the forces at the bridge, but they didn't have enough time for the Harkenwold Rebels to get set up, so I had the first encounter be a delaying action - a sort of combat-challange hybrid, as described here: Non-combat objective: Delay larger enemy force and my answer to that question reflects how it acutally ran. 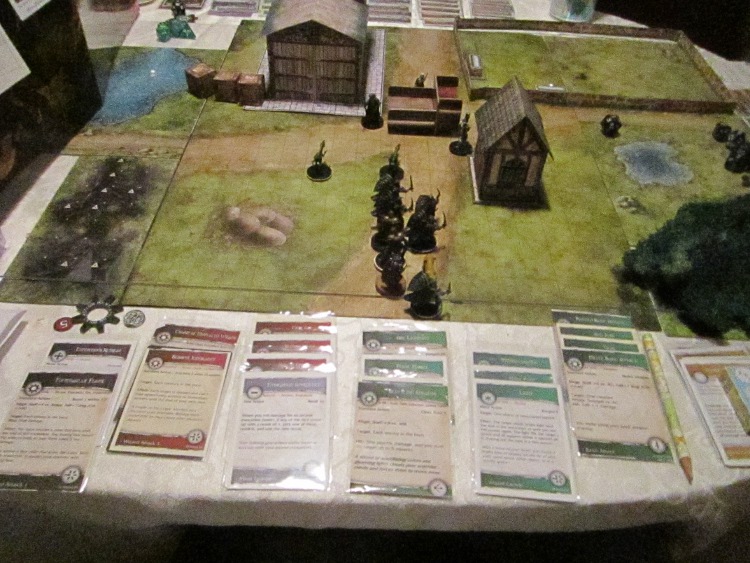 Then, I had the defense of the bridge with each PC in control of 6 rebels (minions). You can see a photo of the start of the encounter of it in this question (the second image, copied here). 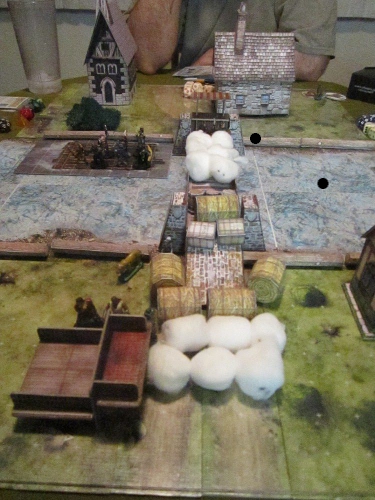 (The cotton balls are sheep. Let's just say there was plenty of meat at the memorial/victory celebration dinner that night.)

Holding the bridge doesn't prevent the final encounter, which I had happen at Dar Gramath's Stables, but weakens the Iron Circle forces that arrive, since they had to go the long-way around.

I made Dar a 1st level Rogue NPC under a player's control, and he did a pantload of damage against Redthorn (thanks to the parties various buffs...) - he barely escaped with 1 HP!

If there is enough request, I'll post the complete encounter descriptions for the Defense of the Bridge and The Revenge of Redthorn.

Ok, to summarize, here's what we ended up doing: I told the players what they could know about the enemy troops. Numbers were about matched, but enemy troops had better training, armor, and weapons, so ultimately the victory would depend on the characters fighting a decisive battle (this was unsaid).

The characters built barricades trapped with explosives over the bridge, traps on the King's road south of town, and even devised a catapult that they tried to build with the local smith's help. They also helped appease some hotheads and inspired the troops with a very uplifting monologue (courtesy of my shyest player, who really got to shine there). Finally, they set up some scouts on the road and archers in the tower south of the river.

After that, I had the enemy move in early in the morning, taking advantage of the morning fog, and marching in "testudo" formations over the bridge.

I used coins to represent the troops, and gave a +1 bonus for each 10 troops to the players, and a +2 for each 10 enemy troops (to represent the better training and equipment). With these bonuses, each movement or tactic was decided with opposed dice rolls.

Long story short, the players managed to block the enemy on the north side of the river, the latter having established a precarious beach-head there. At this point, the remaining enemy troops attacked from the east, and the players had to jump in to save the day. We managed to fight one encounter (there are three encounters, I skipped the first one), and we wrapped up with the enemy leader arriving and shouting profanity at the characters.

Not the answer you're looking for? Browse other questions tagged dnd-4e published-adventures tactics .

13
Non-combat objective: Delay larger enemy force
7
What is a good method for storing papercraft buildings and the like?

29
A PC dies every session - bad tactics or the normal outcome of adventuring?
13
Non-combat objective: Delay larger enemy force
20
What are some good sources for combat tactics for a GM to use?
13
Standard monster tactics for 4E D&D combat
13
How can I learn to play my character when they know more about tactics than I do?
31
How hard is too hard for monster tactics?
16
Hyperintelligent Tactics
9
Can a Hunter learn and use tactics by himself?