Flame Blade is a 2nd level spell, and a very weak one:

You can use your action to make a melee spell attack with the fiery blade. On a hit, the target takes 3d6 fire damage.

This is on average 10.5 damage, while Shillelagh does 7.5 with 16 Wis, with 20 Wis it is 9.5.
So in exchange of 1 damage, Shillelagh does not need Concentration, and its damage type is also more beneficial. A lot more creatures resist Fire than are vulnerable to it, but magical bludgeoning can affect everyone.

Flaming Sphere does the same type of damage and also needs Concentration, but it is usable with a bonus action, has the chance of damaging multiple enemies, and does half damage even if the enemy saves successfully. If we assume (as the DMG does) that attacks can easily be converted to saves, and take a 50% hit chance, both spells have the same damage output.

While sustaining Flaming Sphere, you can use a cantrip with your action, giving further advantage to it.
So for the same investment (same spell slot, concentration, all your available actions) you can do much higher damage with the combination of a cantrip + Flaming Sphere.

While concentrating on one of these spells, you see Treant approaching. You cast Blight with your action. If you used Flaming Sphere you did 8d8+2d6 damage this turn, but only 8d8 with Flame Blade.

The initial damage is 4d6 and it increases with 1d6 per spell level, instead of every second one. This is still weaker than Shillelagh + Flaming Sphere, but at least now it has some use cases. 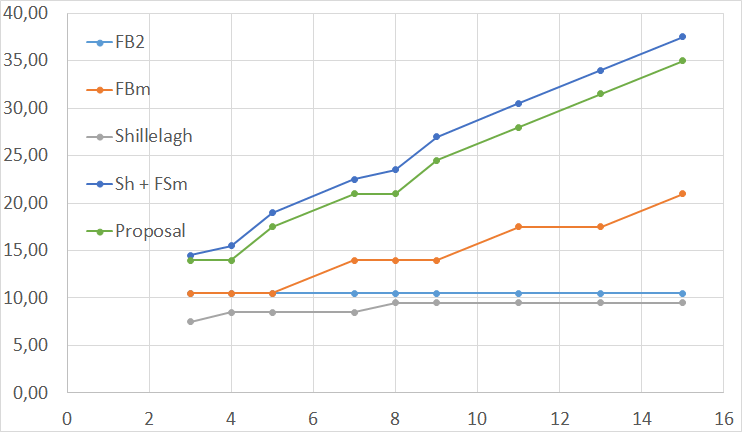 So the questions:
1) Did I miss something, can this get overpowered in some situations?
2) Would another 1d6 be overpowered? It is still less than Flaming Sphere + Produce Flame after level 11

Flame blade provides 3d6 magical fire damage using your Wisdom modifier (melee spell attack) for 10 minutes. This could potentially span two or three combats (likely, if you're in a tightly packed dungeon), and allows you to use other spells or cantrips as you please as long as they don't require concentration.

Flaming sphere, on the other hand, typically lasts no longer than one combat (10 rounds at most), and uses the same level spell slot as flame blade.

We can do the math and see that economically, when the hit ratio is the same (as you have pointed out in your question), flaming sphere does only 1d6 avg "guaranteed" damage, and can only do that 10 times. I say "guaranteed" because it only does damage when it rams an enemy or when an enemy stops within 5 feet of it, and the enemy still gets a save against it. You can control when it rams an enemy, you can't control when an enemy stops near it.

On the other hand, flame blade can hit for 3d6 (that's an additional 4 average damage over flaming sphere if the target fails its save), and it can do it 10 times as many times. At an average of 11 damage and assuming a perfect hit ratio and attacking every round, that's 1100 potential damage over 10 minutes. Flaming sphere, on the other hand, can do 70 at most (and under perfect conditions, with everything going just right, 560 total avg damage).

Finally, flame blade has utility beyond being a weapon: it also produces light that can be dismissed at will and evoked using a bonus action while the spell is still within its casting duration. This is more useful than the light provided by flaming sphere, which in this case burns twice as bright but only a tenth as long.

The proposed changes work well in practice, our druid uses it sometimes

If a spell is so good that a caster would want to use it all the time, it might be too powerful for its level.

This is definetely not the case, so it is not too powerful.

I consider the opposite also true:

if a spell is so bad that a caster would never want to use it, it might not be powerful enough for its level.

I think this was a clear sign Flame Blade was too weak earlier.

The question can be reduced to this:
Is 2 damage per round worth your concentration?
My answer is: clearly, NO

How not to calculate expected damage

Claiming that you can calculate expected damage by multiplying damage/round with duration is like saying you can cover 1000 miles in ten hours if your car's top speed is 100 mph. Yes, It is a theoretical maximum, ou just have to completely ignore trafic, laws, your tank's and your bladder's capacity.
In other words, it is meaningless.

Flame Blade will not last 10 minutes.
Your Concentration is likely to get interrupted when you are in melee range. You might have to stop it voluntarily, because the enemy wants to run away, and you need Entangle to stop it, or it turns invisible, and you need Faerie Fire to enable your party (and yourself) to hit it more reliably.

Take a 4th level Druid, with a Wisdom of 18. On average, he can do 10.5 damage with Flame Blade, or 8.5 with Shillelagh.
Would it be efficient of him to cast an imaginary spell Inferno Staff, that requires concentration, lasts up to 10 minutes, adds 2 damage to Shillelagh and turns the damage type to fire? Spending one third of his highest level slots on something this negligible, while tying up his concentration looks a really bad deal.
At 8th level the damage bonus of Inferno Staff is effectively reduced to 1, if the Druid inceases his Wisdom.

At this point he clearly is much better off with casting Faerie Fire or Entangle, even if they last much shorter. Your DPR increase is much higher through Advantage, and these spells help your allies too.

Not the answer you're looking for? Browse other questions tagged dnd-5e spells house-rules or ask your own question.

63
Weapon attacks compared with damaging cantrips?
8
Can a Druid cast the Flame Blade spell, then use the blade while Wild Shaped?
7
How long can you expect to maintain Concentration during combat?