Can you play a kitsune or nekomata?

Can you play a kitsune or nekomata (fox or cat beings, respectively) in D&D 5th edition? I have never played, but wanted to use one of my RP characters for D&D.

If not, are there any existing races that are similar?

dnd-5e character-creation races
Share
Improve this question
edited May 22 '19 at 9:47

...wandering tabaxi are catlike humanoids driven by curiosity to collect interesting artifacts, gather tales and stories, and lay eyes on....

Tabaxi are a playable catfolk race presented in Volo's Guide to Monsters.

Beyond that, you're looking at creating a custom race, as described in the DMG at pp.285-287. Or looking for some second-party content, perhaps over at DM's Guild.

Eberron Shifter is your best bet

The Wayfinder's Guide to Eberron has a new race, Shifters. Their "Similar and Diverse" description gives great flexibility to their appearance:

Shifters are similar to humans in height and build but are more naturally lithe and flexible. Their facial features have a bestial cast, with large eyes, flat noses, and pointed ears; most shifters also have prominent canine teeth. They grow fur-like hair on nearly every part of their bodies.

In particular, the Longtooth subrace:

Longtooth shifters are fierce and aggressive, but they form deep bonds with their friends. Many longtooth shifters have canine traits that become more pronounced as they shift, but they might instead draw on tigers, hyenas, or other predators.

Wildhunt shifters are sharp and insightful. Some are constantly alert, ever wary for possible threats. Others focus on their intuition, searching within. Wildhunt shifters are excellent hunters, and they also tend to become the spiritual leaders of shifter communities.

would likely be most appropriate for someone wishing to play a fox (or a fox like) race.

The Simic Hybrid race from the Guildmasters' Guide to Ravnica could also work quite well, but you would need to work with your DM to find more appropriate Animal Enhancements than the version presented in the book.

For reference, the description of the race has the following relevant text:

In recent years, the Simic Combine has extended this research to humanoid subjects, magically transferring the traits of various animals into humans, elves, and vedalken.

A hybrid’s biological enhancements can change its appearance drastically, though most hybrids retain their basic physical form. All are augmented with characteristics of animals, mostly aquatic, reptilian, or amphibian creatures. These include crab claws, squid tentacles, wings or fins like those of manta rays, translucent or camouflaged skin, or shark-like maws filled with sharp teeth.

The Kitsune and Nekomata are yōkai from Japanese folklore. The WotC have incorporated very few yōkai into the D&D 5th edition multiverse. One exception is the Oni (roughly the yōkai equivalent of the Western troll or ogre). Based on this observation, it's (maybe) possible that WotC will include more yōkai at some later date. However, there are currently neither Kitsune nor Nekomata races in official WotC 5th Edition D&D literature.

As @nitsua60 commented on your question, you should consult this list of WotC-published playable races in 5th edition D&D first when determining whether the race you are looking for is playable or not.

The closest you can find to the Nekomata are the Tabaxi, as @nitsua60 has already outlined in his answer.

If you and the prospective DM of your group are on the same page (and the DM is willing to add a home-brewed race into the campaign), consider this:

There's a Tumblr community called "DnD 5e Homebrew" that has some home-brew classes/races inspired by popular fiction. One such race is the Kitsune: 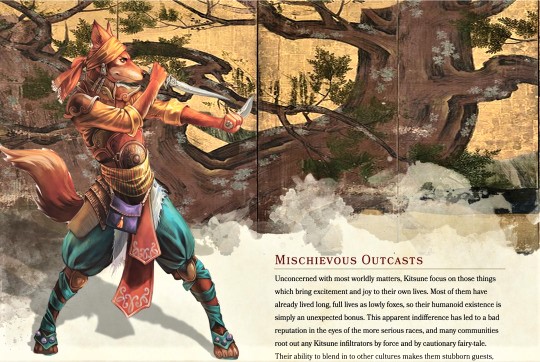 If you follow the link, you'll find a three page playable race description, stylized to match official WotC 5th edition D&D literature, for the Kitsune. As far as I could tell, it matches the folklore. It's up to you to determine whether this home-brew class fits what you imagined the Kitsune race as or not.

NOTE: For any home-brew race, don't assume they won't break your game. Before making a final decision, play-test them thoroughly. Make sure the group (especially the DM) is willing to deal adding that race into the campaign. Perhaps this will be less of an issue if your group isn't dedicated to the RAW.

After a lot of Internet research, I could not find any well-designed playable race descriptions for the Nekomata. I even looked for the Bakeneko, since they are fairly similar yōkai (they don't share the transformative abilities of the Nekomata). No luck!

Tabaxi could be a good starting point

Whilst not foxes, the Tabaxi player race from Volo’s Guide to Monsters on pages 113 - 115 would be close to what you want. You can simply describe your character as being an Inumimi if you wanted to and state they are fox-like rather than cat-like.

Here are the basic traits for the race. I have replaced all references of “cat” to “fox” for easy of copying, if you wanted to use stats based on the Tabaxi that is:

Your tabaxi character has the following racial traits.

Alignment. Tabaxi tend toward chaotic alignments, as they let impulse and fancy guide their decisions. They are rarely evil, with most of them driven by curiosity rather than greed or other dark impulses.

Size. Tabaxi are taller on average than humans and relatively slender. Your size is Medium.

Speed. Your base walking speed is 30 feet.

Darkvision. You have a fox's keen senses, especially in the dark. You can see in dim light within 60 feet of you as if it were bright light, and in darkness as if it were dim light. You can't discern colour in darkness, only shades of grey.

Really the thing to do is just ask your DM. Not every campaign will include every published race, and it's entirely the DM's prerogative to introduce non-published races in any campaign.

If your DM is into methodical world-building, then they'll either be excited about it or reject the idea. If they're not then they probably won't much care.

As for stats: keep it simple and either non-combat-oriented or not strong enough to matter much.

You will need to talk to your DM first, though, because it's not available by default. Here are two ways you can play such a character:

When I created the Nyxad or Night Nymph, I reskinned the Half-Drow but gave them the option of choosing to have the drow darkvision/light sensitivity package instead of the elven darkvision package, chosen at char gen.

You could arguably reskin a similar race for a Nekomata or Kitsune, though I'd imagine half-elf is a flexible starting point for either. I swear, for most kemonomimi and most cutesy seelie or unseelie fey, I recommend reskinning the half-elf of some flavor and representing your youkai type through your racial skill choices, class and background choices, and feat choice.

Though I swear Half-Elves are the new "reskin this race for a cutesy anime girl" race based on what I have seen, and it saves a lot of time spent homebrewing.

Not the answer you're looking for? Browse other questions tagged dnd-5e character-creation races or ask your own question.

14
What race is most similar to a cat?
4
What can I get for my Infernal Legacy?
2
Translating a draconic bloodrager from Pathfinder to 5E
10
How can I play as a Cloud Giant?
11
Can you play monsters?
8
Are Kitsune a playable race?
31
What are the mechanical and role-playing advantages of playing a human?
9
Can you create a catlike humanoid player character?