Why would I use Scorching Ray?

I have a level 3 light domain cleric. I have both the 1st level spell Guiding Bolt and the 2nd level spell Scorching Ray.

When I use a 2nd level spell slot with Guiding Bolt the damage is 5d6 and attacks against the target have advantage for a round, while Scorching Ray with a 2nd level spel slot is 6d6 damage, but you have to roll three times for each ray (which is 2d6) and it's rare for all three attacks to succeed.

What are the pros & cons of Scorching Ray? Why would I want to use it instead of Guiding Bolt?

The pros of Scorching Ray are:

The cons of Scorching Ray are:

The thing that could be either, depending on how superstitious you are about your dice (and what the AC of your target is):

You would want to use Scorching Ray if:

You would want to use Guiding Bolt if:

Damage-wise (as that seems to be your main concern), despite being rare that all attacks hit, since you have the exact same attack roll modifier for both Scorching Ray and Guiding Bolt, you will, on average, do more damage with Scorching Ray.

Imagine that you have a chance of missing a target of 1 in 3. If you attack that target 3 times with Guiding Bolt, you do

If you attack the target 3 times with Scorching Ray, you do

If we bump guiding bolt up to 6d6, then both spells will deal the same damage over the long run, even when you account for criticals. Scorching ray gets crits 3x as often, but guiding bolt gets them 3x larger.

So objectively, scorching ray will deal more damage than a 2nd level guiding bolt (since GB only deals 5d6 damage). As a bonus, you can spread the damage if you know one monster is about dead.

Is 1d6 damage worth giving someone advantage? Probably. But that's the trade off. This becomes less important when comparing both of them with 3rd level slots, since scorching ray scales better.

Scorching ray has the following advantages over guiding bolt:

-It can hit up to three targets, so it's better for multiple weaker foes

-You have three chances to hit, so odds are you'll get at least 2d6 damage, while guiding bolt only gives you one shot

-If you hit with all three, you'll be doing 1d6 more damage than guiding bolt

-It does fire damage instead radiant, which could be better if the target is vulnerable to fire

So if you've got multiple targets, one you definitely want to hit for at least a little damage, or if you've got advantage for a round and want to eke out just a bit more, scorching ray is better

Here's a simple math breakdown from AnyDice. I'm assuming an attack bonus of +5 and an AC of 15. 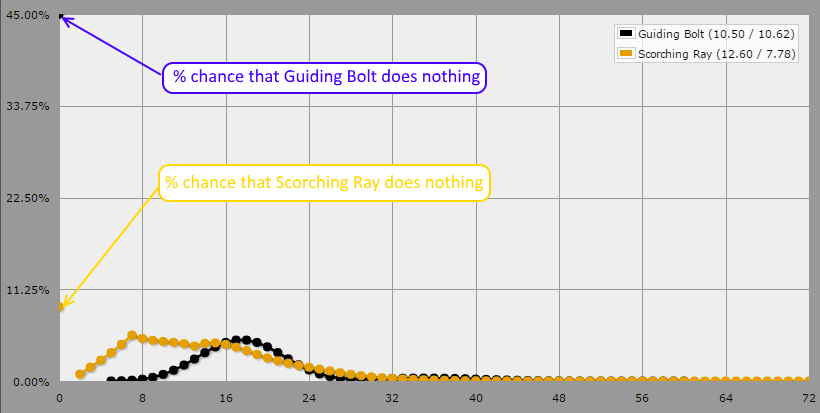 The "bump" in the chart for Guiding Bolt is "that thing" that makes it seem like Guiding Bolt is a win. When it hits you get that big burst of damage, but a good chunk of the time it simply does nothing.

If you look at the medians, the Scorching Ray is higher as you would expect. The Standard Deviation is also much lower. In general, Scorching Ray is going to be more damage each round and it's going to do at least some damage, most of the time.

So Scorching Ray is the default choice.

Some things that could change the math:

Not the answer you're looking for? Browse other questions tagged dnd-5e spells optimization cleric or ask your own question.

14
Is using an ability which affects the next person to hit, knowing a particular PC goes after you, considered meta-gaming?

7
Pros & Cons: Sorcerer & Cleric cross-class
11
How does the ring of mystic fire interact with scorching ray?
36
Is it just me, or is Guiding Bolt horrifically overpowered?
2
Are there higher level spells that use attack rolls?
3
How to get the maximum number of spells when given the choice of a rare magic item and one level?
2
How does my spell attack bonus work with scorching ray?
11
Is upcasting the Chromatic Orb spell (for fire damage) at 2nd level ever better than casting Scorching Ray?
8
How many times do you roll damage for Scorching Ray?