Why does arcane magic work outside Toril?

I'm currently DMing a campaign in the Forgotten Realms, but I want to later on add some planescape and spelljammer stuff in the story, allowing the PCs to travel beyond the world of Toril to other planes and planets. Someone asked a question here about Gods' and Powers' influences in other worlds. My question is similar but specific to arcane magic.

As magic is only possible on Toril through the Weave, which is the body of Mystra, isn't limited to Toril ? Or how would that work on other planets or planes ?

To clarify my question : How is arcane magic possible outside Toril if the weave (which is what makes it possible) only covers Toril ?

(Answers based on prior editions are acceptable if there is no answer based on 5e lore.)

The Weave is not limited to Toril.

The Players Handbook (p.205) does not limit the Weave to Toril, not even to the Forgotten Realms. It seems that only the name "Weave" is limited to the Realms.

The same Information Box mentions, that "in places where the Weave is damaged or torn, magic works in unpredictable ways - or not at all." and "all magic depends on the Weave".

So in places where this "interface between the will of a spellcaster and the stuff of raw magic" does not exist, you cannot cast spells. In places where it's damaged, it may work but unpredictable.

Other worlds may have other Gods who form this interface (in Forgotten Realms the goddess Shar was able to create her own 'Weave' and thus she was able to use magic in places where her own 'Shadow Weave' existed, but the normal 'Weave' did not.).

Mystra's Weave and the Multiverse

Using the Planescape parlance, this question is in the style of a "clueless prime". The Planescape setting is actually an over-setting, covering all of the other settings: even those that are isolationists like the Dark Sun or Ravenloft. Forgotten Realms is just one prime world amongst many others. It would be meaningless to assume that Mystra is responsible for the functioning of magic in the whole of the multiverse, let alone on, say Krynn or Mount Olympus or Oerth.

Each prime material world has its own space around it, called a crystal sphere. Toril is in Realmsspace, Krynn is in Krynnspace etc. Outside of the crystal spaces is some matter called phlogiston. A spelljamming ship can travel in a given crystal space (which allows people on Faerun to travel to Toril's moon Selune, for instance) or between crystal spaces (so you can go from Toril to Oerth, etc.). All of the magic in the Realmsspace is taken care of by Mystra. But beyond it arcane magic works by the rules of the particular sphere you go. (And it works without divine intervention in the phlogiston, otherwise spelljamming would be toast.)

Finally, spelljamming cannot get you beyond the prime material plane. If you go to other planes like Bytopia or Ysgard, etc. by means of a planeshifting spell, all those planes have their own rules and mechanisms for magic as well.

In short, no, Mystra and Toril's weave are not needed to cast spells beyond Realmsspace.

There was no mention of the Weave as the source of all magic in the D&D multiverse before the 5e. It was a FR construct perceived as the embodiment of the goddess Mystra. Even in 5e, Ed Greenwood, the creator of the FR setting has tweeted:

The Weave is Mystra, and extends beyond Toril only so far as individual beings who are Weavemasters do (example: the Chosen, and Mystra herself when she went into the Hells), and even they can't access the full Weave when they're outside Realmspace.

Yet, the 5e Player's Handbook now identifies the Weave as the source of magic everywhere. This generalisation might have been introduced in order to facilitate the return to Vancian spellcasting in 5e after the 4e. If you think about it, declaring the Weave as the source of magic everywhere is quite unnecessary. It explains something supernatural, magic, with some other supernatural thing, Weave.
Imagine we had no FR, removing the discussion of the Weave from the Player's Handbook would have almost zero impact on D&D. Just for FR, it was part of the whole lore around the goddess Mystra, and no such baggage needs to be carried to the other settings.

In the history of the Weave it has been destroyed twice, once when an Arch-Wizard attempted to steal the power of Mystra, which destabilized the Weave, resulting in the requirement that Mystra sacrifice herself to maintain it. During the period which Mystra was dead, magic was non-functional until she was reincarnated.

The second time it happened, Mystra was assassinated, which resulted in the collapse of the Weave and the Spellplague. Wizards and creatures with links to the Weave were either killed, went insane, became spell-scarred and gained powers from their scars, or mutated into hideous arcane beasts.

The reason that anyone can use magic in Toril is because of the Weave. The fabric of the Weave is the domain of Mystra, and casting spells requires tapping into that connection to do so. The Weave encapsulates The Prime Material plane, the Transitive, and both the inner and outer planes. The only areas of the planar cosmology that you cannot cast magic in are in places where the Weave has been destroyed, or in specific places in "The Discordant Domain of the Outlands".

The city of Sigil in the Planescape setting sits within a ring at the top of a tower in The Discordant Domain of the Outlands. As you grow closer to this tower, you become increasingly unable to cast spells. Starting from a specific distance you lose access to weak spellcasting abilities, stronger spellcasting abilities, then deific magic, then nothing. Close to the tower no magic at all can be used. 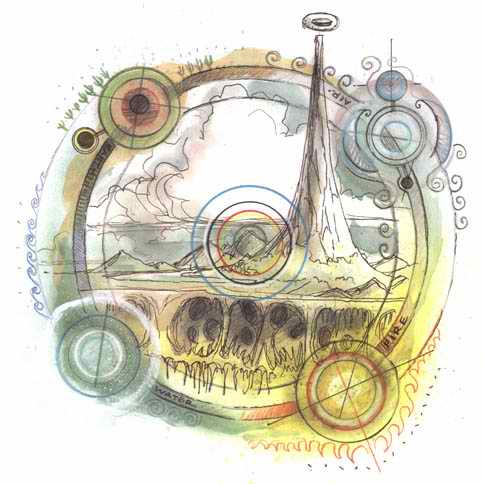 The Weave itself stretches throughout the entire planar cosmology and beyond, the only exception is the areas around this tower atop which the city of Sigil sits. Due to the Lady of Pain's powers to block even deific powers from entering her domain, The Weave does not largely exist until you are a specific distance away from The Lady of Pain's sphere of influence around Sigil.

There's also the Shadow Weave, a weave maintained by the Goddess Shar which her Black Shadow adepts can access and use to create shadows of spells similar to how one would cast from the weave, though the entry to this class hinges on a connection to Shar.

Not the answer you're looking for? Browse other questions tagged dnd-5e magic forgotten-realms or ask your own question.

25
How can I explain a race from 5e Eberron showing up in Faerûn?
7
What happens to a priest travelling from one world to another in the Prime Material Plane?

11
Magic Dead Zones and rules clarifications
9
Planar Ownership—how does it work?
6
Do D&D 3.5e's Warlocks always source their power from a pact?
26
Are elves native to Faerun/Toril, or are they immigrants from elsewhere (like the Feywild)
12
What deity holds the Time Portfolio in Faerun's modern times (from the Time of Troubles to after the Second Sundering)?
14
When did Karsus's Folly become a canon part of the FR lore?
41
What differentiates “Gods” from other entities in the Forgotten Realm cosmology?
17
What are the ramifications of creating a homebrew world without an Astral Plane?
18
Where in the 5e multiverse is Eberron?