Tumble at one-half speed as part of normal movement, provoking no attacks of opportunity while doing so. Failure means you provoke attacks of opportunity normally. Check separately for each opponent you move past, in the order in which you pass them (player’s choice of order in case of a tie). Each additional enemy after the first adds +2 to the Tumble DC.

You make a single check as part of your movement if there is only one opponent threatening the squares you're moving through. If two or more enemies threaten those squares, you'll make on check for each enemy (not per square traveled) with a cumulative +2 to the Tumble DC for each enemy after the first.

Example: Your character were cornered by two enemies in a 15 feet corridor with each of them close to the walls and your escape route is behind them and your move speed is 40 feet. You can make a Tumble check DC 15 to move at half your speed and avoid the AoO from the first enemy and another Tumble check DC 17 to avoid the AoO from the second and cross the distance safely with your move action if you succeed in both checks. 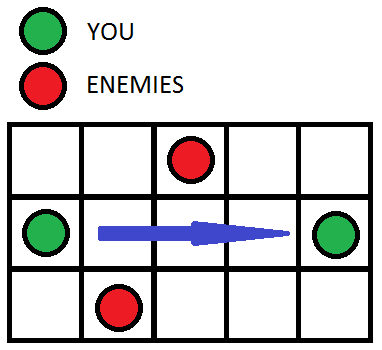