Advantages and disadvantages of using props to represent Magic at larp?

As the question says I'd like to know what the advantages and disadvantages of using a prop for magic spells are.

I'm specifically interested in the idea of throwing bean bags at people, and why it isn't done more often.

I've never LARPed, but I think I can still offer some input on this issue. If I'm totally out of place with my ideas then just disregard :)

I can imagine why using projectiles to represent spells isn't done very often. Using your beanbag example, it is very un-spell-like:

I think props could be used to represent spells, but you'd need something different than a thrown projectile.

For a fantasy setting where a magic user has a finite, replenishable resource than can be consumed to cast spells, I would recommend a super soaker where the water is your mana and you verbally communicate which spell you are casting.

For those with "memorized" spells that can only be used once, I'd suggest water balloons of different colors.

Obviously these suggestions are suited more toward outdoor fair-weather play. For indoor or colder settings there are air cannons that would work nicely.

I think it depends on the form the LARP is taking. In the system I'm part of, we assume that the spells are mind affecting, therefore you can't dodge them (so no need for the bean bags) - BUT the spells can be resisted due to personal conditioning or personal heritage.

Some examples used in our system:

I assume the reason why bean bags are used is to keep track on the spells you have. In our system, mages have to prepare spell cards, which are ripped when a spell is cast. You learn to keep a tally in your head of what power you have left. But, since we don't have "magic missle" or "fireball" in game, we don't need projectile magic spells.

The style of LARP system you're part of would govern whether spell packets are required.

This form of 'prop use' is actually found fairly frequently in 'boffer' LARPs. If I had to guess, its not used in 'no-contact' LARPs because of the aggressive action (and potential for injury) involved.

Both of the systems I've LARPed in (NERO and SOLAR) use spell packets to represent spells, which are basically small bags of cloth filled with bird seed: 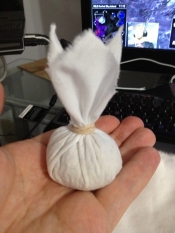 They have the following advantages over beanbags:

Typically when we cast a spell in these systems, a verbal component is required. Packets aren't labeled, they just represent the energy you throw after you recite the verbal.

There are numerous sites with instructions for making them, but I'll add a link to one of them here.

Generally, props are a perfect tool to increase player immersion, to mark targets of the spells, to make spell effects visible from afar, to make spells loud, or to balance out the powerful spells by introducing a need to use a prop (e.g. the spell only works if a projectile hits your target).

Each prop, however, comes with its pros and cons. Read below about the various props used in LARP in Russia.

Fantasy LARP around my area (Russia) routinely uses tennis balls to represent magic spells. The balls are to be thrown and can be dodged. A hit is registered if it touches any part of the person's body, equipment, clothes etc. Some characters are allowed to block the spells with their shield. Most of the spells delivered via tennis balls are damage spells that deal 2 points of damage. For comparison, bows and crossbows also inflict 2, and a regular melee hit inflicts 1.

Tennis balls are usually wrapped in cloth (e.g. red) to make them look cooler and have a "tail" when they fly.

Tennis balls are generally completely safe as they are very light and it is hard to toss them with energy high enough to really injure someone. Kind of the opposite -- sometimes, if the target wears armour, the target can't even understand that it was hit. This is likely the biggest downside.

They have an important advantage: it's possible to throw them very quickly, you don't need an extra weapon to toss them, you can carry a big amount of them, etc.

One more disadvantage is that you will inevitably lose some of them, be prepared for that, and carry a big amount with you.

"Ultimate", unavoidable spells that are just announced from range and affect an enemy aren't common, as people get frustrated very much when affected by something that they cannot dodge or block but which can disable them. Spells that are not physrepped by tennis balls are mostly touch attacks, some can only be delivered with bare hands, some -- through the wizard's staff.

Touch attacks are cool, but are sometimes hard to distinguish from ordinary melee hits. Plus, they can create personal space issue. To say it directly: be careful not to touch some chests when attacking girls with your Shocking Grasp. It's really not funny.

However, we often use non-projectile props such as fireworks to make everyone around know that a spell was used. Outdoor LARP can even use smoke candles to simulate magic smoke, poisonous fog etc.

Besides being sometimes unsafe, fireworks don't show the person being targeted, so they probably work better if you need to notify a lot of people about a magic action, or if you pair them with another target marker (at least voice).

And one more use of physical props for magic: sometimes we use pieces of transparent cloth to show a condition such as being invisible (for which you cover your head fully with a blue-ish transparent piece of cloth) or being teleported and moving to the desired location, for which one can use, say, green cloth. One LARP that I've participated in used red cloth to show battle rage being activated: this is related, but I am not sure if it counts as magic. It was a divine power in this setting, though.

Pieces of cloth turned out to be the only working marker for invisibility. Seriously, any other method blatantly failed and created issues when people didn't know that their characters didn't see a spy, or a wraith, or an assassin that were under some concealing magic.

How could I initially forget about that? Long LED lines look awesome at night! And they can simulate portal borders, or fire, or... pretty much anything! Experiment, set your fantasy free! Woo-hoo!

During the day you can use colored bands for that, as it might be hard to compete with sunlight, but never ever rely on them if the outdoor action continues at night, even if hosting your LARP during full moon. Noone will be able to distinguish a red band from a green one at night.

While LED is awesome for stationary thingies, they fail when you need something movable or attackable, as they can be squishy. LED can also be expensive.

Can Bardic Performance from D20 systems count as magic? For me -- definitely yes. The best way to physrep a bard is to use a real musical instrument to play a real melody. The bard can then call the effects by voice, and the instrument can count as a magical prop. Work awesome at one Dragon Age LARP. :)

Of course, musical instrument will only work well to represent playing a musical instrument, but you shouldn't limit this to Bardic Performance: you could also buy a cheap flute (for around $10-15) and introduce it as an artifact.

When hosting something in an enclosed space (not necessarily indoors, you can use a generator), you can use a computer to play tracks to show what's going on. For example, one LARP about Dragon Age used the voices of the dark spawns in a dungeon. Another LARP about Harry Potter had a special melody to indicate for all the players that a Time-Turner was used. If it was played, all the players had to return to the position where they were 5 minutes ago and continue the action exactly as it has been done during the last 5 minutes.

I will try to remember more stuff if I can, but for now it seems to be all. Anyway, that's not the focus of the question. It's important that props drastically improve your ability to immerse your players in the game. Yes, any LARP and any prop requires some effort from the players to fight disbelief, but props definitely help and increase your arsenal as a GM.

I've seen especially any kind of 'ball'-magic represented via props. F.e. a simple tennis-ball surrounded with a thick layer of silicone or thick cloth pieces filled with sand. Other magics are harder to simulate, but I've also heard about streamers and similar used.

Bean-bags (with only knowing what I heard about them in TV) do not sound like safe device to throw at people mid-battle. If you gonna throw something make sure that it can't hurt the player no matter where it hits, or make sure that the player knows what's coming his way (and he's fine with that).

Not the answer you're looking for? Browse other questions tagged larp props or ask your own question.

12
How can I safely represent non-combat fire magic?
3
What should I use to represent the Stronghold point in my LARP?
13
What is a good mechanic for a test of will power?
27
How do I make it absolutely clear that I'm shooting you in the face?
10
How can I help inexperienced LARP crew to speak confidently?
7
How do I promote the use of crossbows instead of bows in LARP?
11
How should I handle signalling & costuming for an “ascended mook”?
31
Is a CO2 fire extinguisher safe to use indoors to represent offensive magic or breath weapons in LARP?