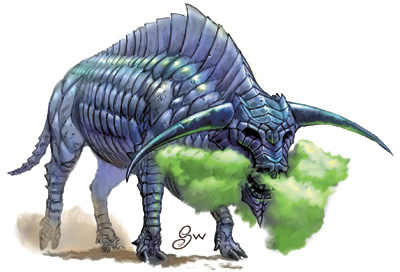 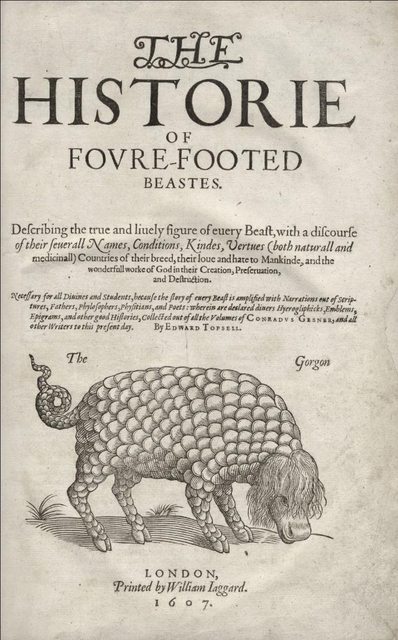 There are several direct statements by Gary Gygax about the source of the Gorgon, on the ENWorld Forum Thread

(Typos as in the original posts - Gary was more about getting the answer out than about spellchecking on those forums, it seems.)

You clearly are not steeped in medieval bestiary lore;) In that regard the gorgon is a scaled bull, so rather than having only three sisters the D&D game had a rade of medusas and a race of gorgons.

The bull-like, metalpscaled gorgon is taken directly from a medieval bestiary. You might point out that I have medusae as a separate kind of monster. Do tell your Astute Wife that the critter shown is just one of many taked from medieval bestiaries. the catoblepas and opinicus being a couple of other examples. (Post #7537)

The scale-mailed bull model of a gorgon came directly from a copy of a medieval bestiary, the title of which I do not recall, but it was and probably still is in the local (Lake Geneva) public library. I was happy to use that model, for it added another fearsome monster to the roster for DM use (Post #5292)

And also on the Dragonsfoot Q&A with Gary Gygax:

There is no definative authority regarding fabulous monsters. For example, a medieval bestiary shows the gorgon as a metal-scaled bull as I gave in the AD&D MM. (This post)

The bull-like gorgon with iron scales is found in medieval bestiaries. I know it for a fact because that's where I got the critter--along with the catoblepas and a handful of other monsters (This post)

It looks like afroakuma found a likely candidate for the "medieval bestiary" Gary refers to. Someone with access to the Lake Geneva public library could probably check if that volume is in the catalogue and close the loop -- I could not find it in the online search.

If you are interested in OD&D monster sources, here is a compilation from trawling through Gary's posts on these forums.

Not the answer you're looking for? Browse other questions tagged monsters dungeons-and-dragons history-of-gaming .

34
Where does the D&D concept of a Gnome come from?
39
What's the origin of the Mimic?
26
Where do Gorgons come from, according to D&D lore?
10
What are the origins of the Displacer Beast?

40
Why is the soft level-cap set at level 20, specifically?
17
Why is the Deck of Many Things called the Eater of Campaigns?
104
Why does “dungeon” mean the places adventurers go to kill stuff?
27
Why are Solars so powerful compared to other Outsiders in D&D?
36
Why do druids use scimitars?
107
Why are psionics controversial?
32
Why were there two ongoing D&D magazines, and what distinguished them?
37
Why aren't Halflings Hobbits?
27
What in-universe reasons exist that explain why a druid can use metal weapons but not wear metal armour?
10
What is the in-universe explanation for why succubi, who were demons, became devils?