What's the best way to resolve a paradox created when a mage shapeshifted into a larger creature enters an antimagic field, but its true form doesn't?

This is based on a situation that's happening in my current campaign, though the example below is simplified to remove unnecessary context.

The shapechange spell (Player's Handbook, page 274) only limits the form that its user can change into by Challenge Rating, rather than size.

In the following situation, how, if at all, would shapechange be suppressed?

To begin their battle, the druid casts shapechange, transforming into an ancient brass dragon, a Gargantuan creature (figure 2).

To counteract this, the wizard casts antimagic field (Player's Handbook, page 213) which creates a field of anti-magic in a 10-foot radius sphere around the wizard within

"Spells and other magical effects, except those created by an artifact or a deity, are suppressed in the sphere and can't protrude into it."

It seems clear-cut that shapechange is suppressed until the druid exits the antimagic field, and so reverts to its normal, medium form (figure 4). 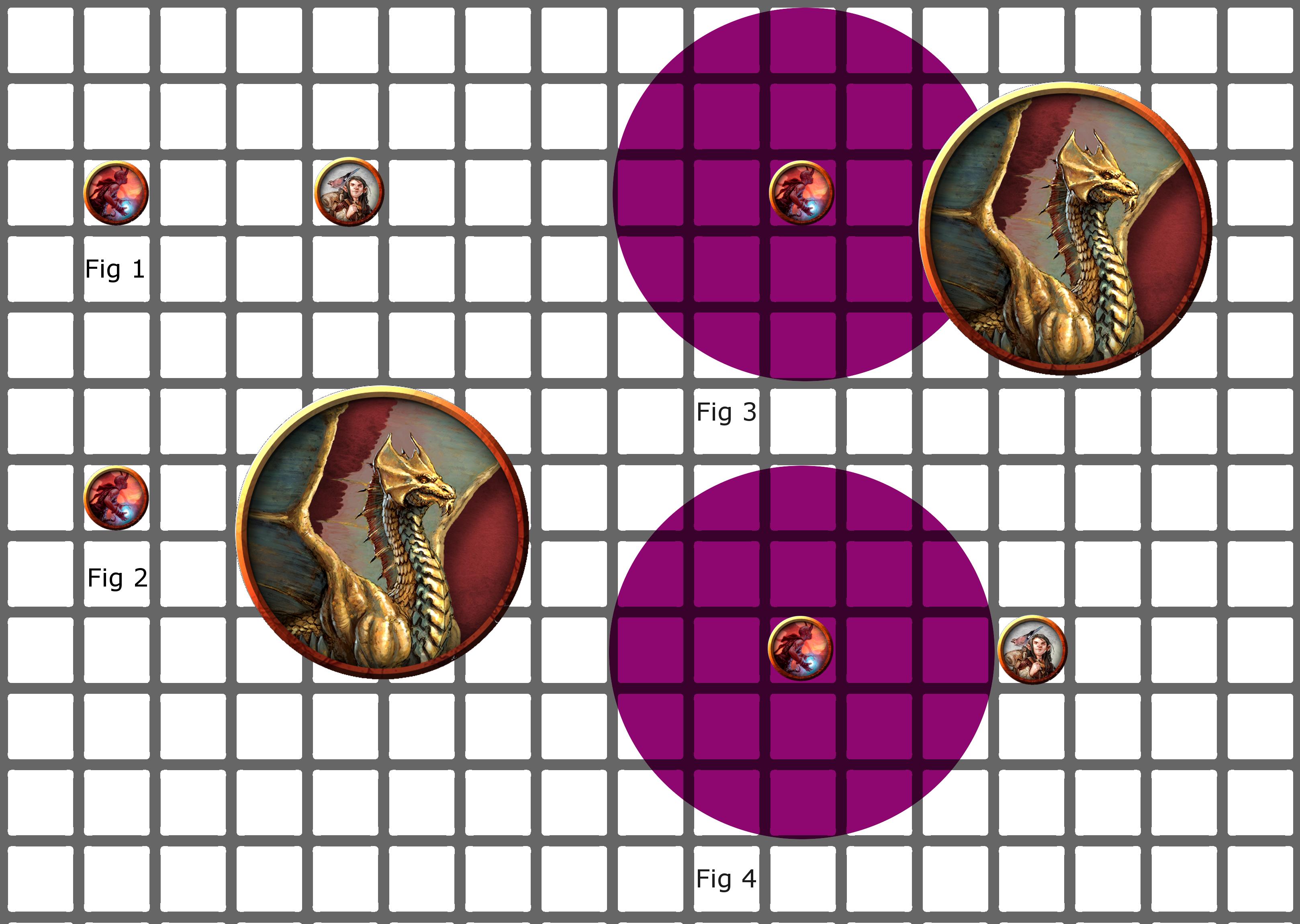 If you maintain creature positions, the effect is simply suppressed and the druid remains in its typical form

The druid can't take the Brass Dragon form when some portion of that form would intersect the region affected by the anti-magic field. The order of events, as described in the question, is as follows:

I submit that there is a breakdown between steps 3 and 4. The effects of shape-changing spells are immediate and there is no time spent in the transformation (by RAW; cool narration may differ). So the transformations don't take up any time. But the Brass Dragon form cannot persist here, as the anti-magic effect prohibits it. Meanwhile the druid form can persist here.

Even if you favor an infinite loop of transforming back and forth, the druid cannot spend any time in dragon form here. But if time still passes, as over the course of a turn, the druid must have some form, and if it can't be the dragon it must be the druid. Therefore, as long as the larger, shapeshifted form would intersect the anti-magic field and immediately suppress the effect, the transformation cannot occur/cannot persist in time. The only form the druid can be in is one which does not enter the anti-magic field.

This is in line with a (somewhat but not exactly) analogous limitation described by Enlarge/Reduce:

If there isn't enough room for the target to double its size, the creature or object attains the maximum possible size in the space available. (PHB, Chapter 11: Spells, Spell Descriptions, Enlarge/Reduce)

You can only become as big as the space allows. The anti-magic is, in effect, a limitation on how large a creature could become. As shapechanging doesn't allow for dynamic sizing, the druid cannot be in its shapechanged form as long as the anti-magic effect would interfere.

It is essential to understand that just because an ancient brass dragon is Gargantuan, does not mean that it occupies the entirety of a 20' x 20' square. Rather, DMG Chapter 12 (Monsters) says:

Size. The Size Categories table shows how much space a creature of a particular size controls in combat...

Creature Size. Each creature takes up a different amount of space. The Size Categories table shows how much space a creature of a particular size controls in combat...

Thus, one simple resolution is to reposition the body of the dragon such that the entirety of its physical form is outside of the antimagic field (without actually moving it - this is an absolute reduction in squares occupied, not a shift in squares). The druid would be permitted to retain the form of a dragon, but would not be permitted to control any space in which the field covered more than half the square. At the discretion of the DM, if this sufficiently restricted the area available to the dragon, it would also be subject to the squeezing condition.

The DM could rule that this simply happens per force to the positioning of the dragon, similar to other shape change effects that automatically take account of environmental circumstances. Or, the DM could allow the player of the druid to decide, and give them the choice: "In response to the antimagic field, you can adjust your positioning to retain your shape as a dragon. If you choose not to, you will resume your shape as a druid until such time as you can move further away from the field." I would suggest the latter, since as a DM I try to give players more choices and more autonomy.

Some might object that the druid could not adjust their position when it is not their turn. I consider this analogous to the standard condition of changes of facing being free even when it is not one's turn, being able to use a shield to defend against attacks from any direction, etc. (basically everything that is allowed when one is not using the optional facing rules from DMG 252)

To sum up, when the dragon is affected by the antimagic, we can assume that the dragon form is maintained, but in a smaller number of spaces. Only when the dragon itself no longer fits in the spaces available is it forced to revert to the druid.

The OP asks for the "best" way to resolve this paradox, but has neither put forth criteria for what the best resolution would be, nor had their question closed as opinion-based. I offer the following as recommendations for my answer:

(1) It is fun in that it allows both the shapechange and antimagic field spells to still be, at least partially, in effect. For both players it allows meaningful choices.

(3) It is rules-based in that the restrictions imposed on the dragon shape are grounded in RAW for size, position, and squeezing

(4) It is quick in that the initial decision of what happens is based on a single assessment of the DM and then a possible decision by the player of the druid, rather than perpetuating a state of infinitely repeating transformations.

(5) It is tactical in that both players can use their positioning to further change the situation, but such changes are simple to resolve.

While not intended, it seems my comment is more of an answer than expected, so I will formalize it herein.

In order to prevent this paradox, despite the original location having two empty squares between the druid and wizard, when returning to medium sized any square that was occupied by the druid becomes fair game. Since there is an effect causing it to be suppressed instead of dismissed/cancelled/countered, it would make the most sense for the medium sized square to be within the space of the effect that is suppressing the larger size. Otherwise depending on how your group handles increasing/decreasing size, you end up growing once no longer suppressed, and then shrinking again if you ended up back within the effect.

When it comes to increasing size, my groups have always allowed the player to grow as they see fit so long as their original square(s) is contained entirely within the new form's space.

The rules have no guidance, and yoyoing between forms forever doesn’t make sense, so just pick a position for the Druid that makes sense.

The rules don’t tell us what to do here, unfortunately. But in my experience, infinite loops are probably wrong, so we need to just make a ruling that does not result in the Druid yoyoing between forms because of entering and exiting the antimagic field repeatedly. So just position the Druid so that we don’t have that happening. The best way to resolve it is any way that moves combat forward.

The spell is partially suppressed.

Typically when something finds itself inside a magical area whose description/rules state that the thing "cannot exist" there, the thing is ejected or forcibly moved (see Mordenkainen's Magnificent Mansion, Passwall, the Genie Warlock's Sanctuary Vessel ability, Watery Sphere, Wall of Stone, Wall of Force, and so on).

So in this ruling, the Druid retains their Ancient Brass Dragon shape, but is physically pushed back/ejected from the sphere.

You could afford the player more agency (usually a good idea in D&D) by giving them the choice—as discussed in other answers already—of whether they want to allow the Ancient Brass Dragon form to be dropped while remaining in the edge of the Anti-Magic sphere as their new position, or be pushed out of the sphere and retain the Ancient Brass Dragon shape.

Not the answer you're looking for? Browse other questions tagged dnd-5e spells creature-size area-of-effect antimagic-field .

13
When a druid reverts to their normal form having wild shaped into a Large beast, can they choose which square they occupy?