Why are dwarves medium?

In AD&D dwarves were small ("Dwarves", Monster Manual 1st edition) like halflings and gnomes. I am wondering why this was changed in the 3rd edition. Is it because of the bulk of the dwarves? Or is it a solution to making dwarves good fighters and avoiding the -2 Str small creatures suffer?

Why were dwarves made small in older editions of D&D but in 3e and later they're considered medium?

Dwarves aren't defined as Small size in AD&D 1st or 2nd edition – they just happen to be. The thing is that creature sizes work differently in AD&D than in D&D 3.x.

In AD&D, your size class isn't attached to your race, it's attached to your actual height and weight. In AD&D, a medium creature is defined as between 5+' and 7', and of average build. In 2e, a medium creature is defined as 4+' and 7', and of average build. The listing in the 1st and 2nd edition Monster Manual is merely the size class of a typical member of the dwarven race, not a blanket size category. In AD&D, both editions, actual size determines mechanical size class.

This can be seen especially in the (optional, at most tables) random height tables in 2e. It is possible to roll a dwarf between 3'6" and 4'5", making the first dwarf Small and the second Medium. In 1e your height and weight were up to you to pick, and you could easily have a Small human along with a bunch of Small dwarves, if everyone picked their heights to be 5' or less.

In 3.x, the general push to normalise the rule subsystems resulted in some changes that put the game system ahead of the fictional simulation. One of these was the size categories. In 3.x, adult dwarves simply are medium creatures, and that's the last word. This inverts the relationship between mechanical and fictional size compared to AD&D: in 3.x, your size category is what is important, and your actual height is mostly irrelevant fluff.

Why Medium though? A lot of the choices in 3.0e were made simply to make it compatible with the expectations people had developed from 2e. It's only speculation, but it's entirely likely that dwarves were made Medium creatures simply because a typical dwarf PC in 2e was medium too. Many groups were converting existing campaigns to 3e, and dwarves have always been popular. There would have been an unholy uproar if suddenly there were players everywhere whose favourite dwarven PCs suddenly turned into less effective fighters than they were in 2e.

Here's my answer: Dwarves are supposed to be a warrior race. That was how they were portrayed in Tolkein's works, and so that's how they are in D&D.

In older editions, being small didn't give you any penalty in combat. In fact, as you probably noticed, the size of dwarves and halflings isn't even mentioned in the Player's Handbook; it's in the Monster Manual instead.

By 3rd edition, there were penalties for being small: you did less damage, were less good at grappling, etc. That's at odds with the common image of the dwarf as equal to a human in battle. So the size categories were defined in such a way that, despite their smaller stature, dwarves were still considered medium creatures. (They're certainly larger than halflings, gnomes, and goblins.)

Next time I'm near my 2e tomes I'll see what their status was in that edition -- someone indicates they were already considered medium by then.

This is not a complete answer, but contains some logic for why they are medium creatures in dnd 3.5.

No source: They have a variable height usually between 4 and 5 feet in newer versions.
Also no source: they have weight/mass similiar to humans.

according to 3.5 size chart

Dwarves clearly fit into this category.

In particular, the dwarves in the Germanic story The Ring of the Nibelungen and the Brothers Grimm fairy tale "Rumpelstiltskin" have been called "ancestors" of Dungeons & Dragons dwarves. Along with giants, dwarves were one of the first types of non-humans to be introduced into the Chainmail game, the forebear of D&D, when miniature figures of varying sizes were used together in the same wargame. The dwarf first appears as a player character class in the original 1974 edition of Dungeons & Dragons, with a design that is strongly influenced by the dwarves of Poul Anderson's 1961 novel Three Hearts and Three Lions. This early version of the D&D dwarf is limited to playing a fighter, and can not progress beyond the sixth level. The dwarf is again a character class in the original Dungeons & Dragons Basic Set (1977). With the arrival of Advanced Dungeons & Dragons, the dwarf was modified into a player character race in the Player's Handbook (1978) and detailed as a monster in the original Monster Manual (1977)

I guess, mythology and tales characterized dwarves as small and cute beings (like elves described as fairies in tales and become human-like in D&D). I do not know how Anderson define these creatures in his novel. But I guess, in time, D&D thought they must look like strong warriors instead of cute little beings. Old D&D drawings are all show them as slimmer little fellows (D&D 1e) and by time, they got bigger and muscular with broad shoulders and well shaped chests. 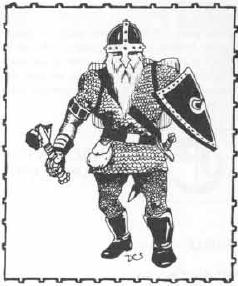 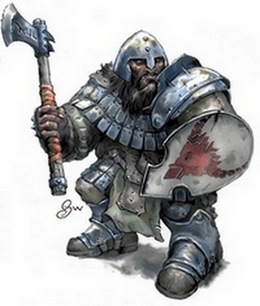 And as fighters, being small is not fit for D&D concept much. Halfling and kender are rogue besed and really suitable for their role in the concept. But dwarves, mighty warriors with smaller size than a human? Bah, not so attractive...

Also, there is this question about origins of D&D dwarves

Not the answer you're looking for? Browse other questions tagged dnd-3e history-of-gaming or ask your own question.

28
Where does the D&D concept of a dwarf come from?

22
Why are whips so restricted?
8
Why are there no bonus cantrips for high ability scores?
36
Why are elves immune to a ghoul's paralyzing touch?
20
Why are Solars so powerful compared to other Outsiders in D&D?
34
Why do druids use scimitars?
106
Why are psionics controversial?
23
Why are Clerics and Druids Wisdom-based?
41
Evolution of the Rogue in D&D
33
Where does the D&D concept of a Gnome come from?