What is a good way of managing status effects in medium-size encounters in D&D 3.5?

Recently, my three 6th-level players (Sorcerer, Druid, Barbarian) encountered some 15 orc barbarians. The sorcerer started casting Glitterdust (save or be blinded) and Stinking Cloud (save or be nauseated), the Druid Entangled away (save or be entangled, re-save later if still in the area) and the Barbarian, well, raged.

As I thought saving for all the orcs in one roll would be very swingy, I decided to roll saves for each of them separately. That was doable, but then I had to keep track of what orc had what penalties and when they would need to re-save. My Excel sheet exploded, not to mention my head, trying to wrap itself around all different combinations of status ailments.

What should have been a quick warm-up for a bigger threat turned into a massacre: both the orcs and my sanity were torn to shreds.

What is a good way of managing encounters like these, with multitudes of (recurring) saving throws, status ailments and the like? Is there software that can take the brunt off the calculations I have to do? I'm imagining something where I can just tick a box for each ailment and the software modifies the base stats I feed it into actual values.

Mobs tend to not be very effective in 3.5

As you noted, the orcs were torn to shreds. The party had powerful, area-affecting debuffs available, and used them. Meanwhile, due to the extreme degree to which the orcs outnumbered the PCs (5:1), we expect that the orcs were commensurately low-level (the CR guidelines would suggest that their numbers alone represent a CR increase of about +8, which means even if these were 1st-level orcs, the CR guidelines consider this a CR 9 encounter).

The issue is that 1st-level characters are going to have a very hard time saving against 6th-level characters’ save DCs, and a very difficult time hitting 6th-level characters’ AC. At 6th-level, the druid could easily have gotten some quality non-metal armor, the fighter would probably be in full-plate or magic armor, and even the sorcerer might have a mithral buckler and mage armor already up before the fight began. The spellcasters have 3rd-level spells available, and should have +2 to their primary casting ability, which means their DCs have been improved by +2 to +3 relative to their 1st level selves. And 1st-level orc warriors aren’t exactly noted for their saving throws in the first place.

So in a lot of ways, you don’t want to use encounters this large. They rarely pose significant threats, and they cause major headaches at run-time. Rather than being “medium-sized,” this is “quite large!”

That said, there are management options available

Especially if you are mapping out encounters. For example, there are “condition markers” available for sale, or that you can make yourself. For example, this guide shows you how to make these: 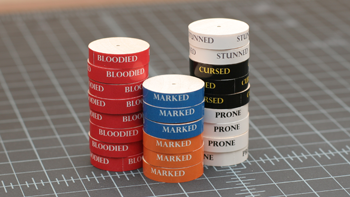 Just stick them under your miniature to indicate statuses it’s got. Or just use colored pieces of paper, like Post-Its: if you rotate them slightly with respect to one another, the corners will stick out so you can see each color (and Post-Its will stick to each other to maintain that orientation). Just about every virtual tabletop software also has similar markers to indicate status, usually little icons put in the corners of the creature’s token.

If playing “theater of the mind,” what I have usually done is simply kept track of the numbers of affected/unaffected targets, and the actual HP ratios generally just for one enemy per character: the one that character is fighting. My players tend to focus-down enemies (which tends to be an optimal strategy), so I don’t really need to worry about what’s happening to other characters. My players just say “OK, I’ going to attack one of the blinded ones,” and I note that they’re in combat with a blind one. If unblinded ones come to attack him, I note he’s in combat with one blind one and a couple of unblinded ones, and he’s hurting the blind one. If he kills the blind one, I just note that there is one fewer blind one.

Obviously, sometimes I have to get a little more detailed, such as if he leaves the blind one half-dead because the unblind ones attack and he switches to them. It happens, but basically until it does (that is, until a player singles one out), I just treat them as part of the generic group of unblind ones and that’s it.

As the GM, conditions are going to come up. Having the effects of the conditions memorized will make your job a lot easier. There's not a huge list of them - going over it a few times should be relatively easy to remember. If not, make a cheat sheet, with derived values. A -4 penalty to dex is -2 ac, -2 initiative, and with a bow, -2 to hit. Having that on a cheat sheet is very easy.

If there's a lot of a single monster, you could create a statblock for that monster with common conditions if you expect it will get blinded or whatnot, or you're slow at doing head-math at the table.

Don't roll individual saving throws for 20 orcs. That's a terrible idea. Always, always, take the statistical average (or mix it up, and say that most saved one time, and then say they rolled poorly and most didn't make it the next time).

I understand not using the Mob template sometimes (DMGII iirc), as it's a bit weird and hard to understand how stuff like 'kicking an individual orc over the ledge' works sometimes. I'd still take a look at it - it abstracts groups of enemies into a single 'monster' with combined stats and hp.

Groups of Enemies are either Weak or Overpowered

Depending on circumstance, it's hard to make just a group of weaker enemies a good challenge. I recommend deploying them as part of ensemble encounters with stronger leaders or monsters. In that sense, you can apply the rules strictly to the leader or serious threats, and abstract the actions/defenses of the minions, and it feels very natural to do this.

The PCs will treat the orcs as an environmental hazard, and that's great - that's exactly how a 'guards, get them!' situation should work.

Not the answer you're looking for? Browse other questions tagged dnd-3.5e encounters conditions or ask your own question.

9
What is a good item vs Undead in D&D 3.5
5
What is a realistic way to incorporate firearms into D&D 3.5
6
What does a D&D 3.5 druid get as a result of size changes during wild shape?
20
What effects do critical and fumble tables have on D&D 3.5?
5
What object size is a bastard sword made for a Medium character?