How do I read the Black Fang’s melee attacks from the Pathfinder Beginner’s Box?

I recently bought the Pathfinder Beginner’s Box and we (all new to RPGs) were discussing the Black Fang’s melee attacks. 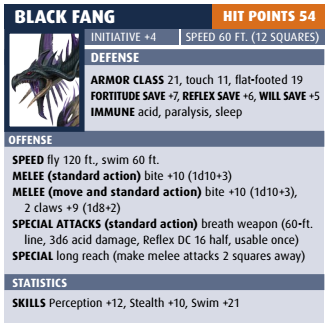 I would think that using the second attack that uses both actions, Black Fang could first attack PC with bite and then follow with a 2 claws attack. I learned that with 2 claws he can target one PC with each claw. So basically, he could either waste one PC with three consecutive attacks, or severly injure up to three PCs. So that would make him extremely powerful.

Another thought was that I could attack either with bite or with 2 claws. This would make sense because 2 claws is already a very powerful attack, but on the other hand this seems stupid because why should I waste the move action and choose bite as my attack.

How do I read his move and standard action attack, if there are multiple attacks separated by commas?

The black fang can attack with both the bite and the 2 claws in the same turn.

Attacks made with natural weapons, such as claws and bites, are melee attacks that can be made against any creature within your reach (usually 5 feet). These attacks are made using your full attack bonus and deal an amount of damage that depends on their type (plus your Strength modifier, as normal). You do not receive additional natural attacks for a high base attack bonus. Instead, you receive additional attack rolls for multiple limb and body parts capable of making the attack (as noted by the race or ability that grants the attacks). If you possess only one natural attack (such as a bite—two claw attacks do not qualify), you add 1–1/2 times your Strength bonus on damage rolls made with that attack.

Black Fang can take a standard action to make one bite attack.

Or Black Fang can take both its move action and its standard action to make one bite attack and two claw attacks. Black Fang can make these attacks against one (doomed) creature or spread them around against up to three different creatures. When it makes each attack, Black Fang picks against whom that attack will be made.

Not the answer you're looking for? Browse other questions tagged pathfinder-1e attack pathfinder-beginner-box or ask your own question.

10
Pathfinder: 2 Talon Attack or 2 Attacks?
19
Can monsters make multiple attacks in a single action?
4
Eidolon attacks per round
5
How many attacks does this dragon have per round?
2
How many attacks do I have in a standard action with natural weapons?
8
How do free Grapples/Grapple Feats interact with full attacks and additional grapple damage?
11
Can a vampire attack twice with their claws using Multiattack?
1
How many attacks does an Adaptive Shifter get when using the ranged ability from Spiked Form?
3
How does 'Standard Action Attacking' Work with the Big Cat animal companion?