How can I make a Beorning Shapechanger in MERP?

My friends and I are starting a MERP campaign and only I have experience with MERP. One of my friends wanted to be a shape-changer, but my Second Edition MERP book does not cover how to use Martial Arts, Adrenal Defense, or Shape Change, so I am at a complete loss.

These skills are address in the Second edition rule book.

On page 218, under section A-6.2 Martial Arts and Adrenal Defense

If a character is not using Armor or a shield and he moves at least 5 feet during a round, his skill bonus for Adrenal Defense is added to his normal DB. This applies to each melee, missile, and directed spell attack which he is aware of (i.e., it does apply to an attack that surprises him)... there is no stat bonus for this skill.

The Martial Arts skill is listed on the same page in the same section and I have posted it here: 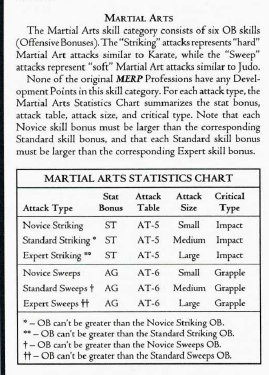 There is a new optional profession that is called Shape Changing, it is designed specifically for this type of character. It can be found on page 217, and reads as follows: 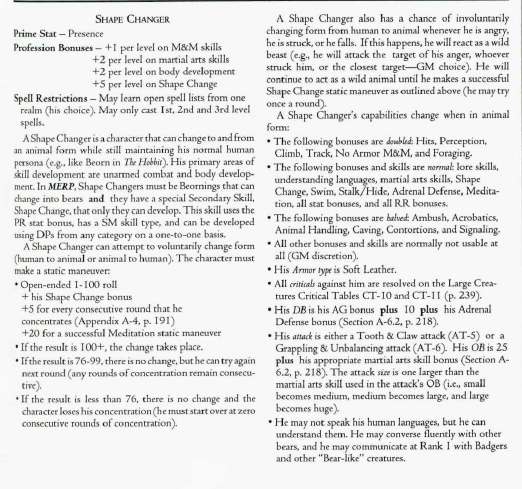 The cost of being a Shape Changer is pretty high, but there they are, such as it is.

The skills you've mentioned are all in Rolemaster (in its various versions), which is what MERP is based on.

The three skills translated from Rolemaster to MERP are:

Not the answer you're looking for? Browse other questions tagged character-creation class-feature unarmed-combat shapeshifter middle-earth-role-playing or ask your own question.

17
Playing a loyal character without it being boring
27
Does using versatile weapons with 2 hands disqualify them as Monk weapons?
2
Will trading the Monk Martial Arts feature for the Grappling Feat cause problems?
19
My Druid is Shapeshifting a *lot*. How do I keep up, create moves, and keep the game interesting?
12
Must a Paladin's starting equipment from the first bullet be one-handed weapon?
16
Can a monster use Shapechanger to take any form, or just one unique form?
6
Does an Oni get new HP when it changes shape into a humanoid or large giant?
15
Can a lizardfolk monk use their bonus action to make an unarmed strike using their Bite trait?