Experiment with Two-Weapon Fighting Alteration: Is it Balanced?

I've been working on an alteration to how one engages in Two-Weapon Fighting, which I've disliked the vanilla version due to various well known, or at least heard, problems. Here are a couple spots that talk about the issues I'm referring to: Why is two-weapon fighting considered subpar for fighters? and https://www.reddit.com/r/dndnext/comments/im3eug/twoweapon_fighting_why_its_good_why_its_bad_and/.

The specific flaws I'm aiming to address here are:

After working on this for quite a while, I believe I've gotten something that would address these issues. But I was wanting to get feedback on potential oversights/ slip of wording that I could have missed from folks that I have reasonable faith in their system mastery (all feedback is appreciated). Here's what I've done below, with a brief synopsis of the intent of the changes done:

(The intent for the mechanic was to have each pair of attacks behave like the Rogue's Sneak Attack would behave for a full turn, but taken to treat anything that increased damage like a Rogue's Sneak Attack dice (only exceptions being from things like a +3 sword, critical hits, or flame tongue but not things like Hex, Crusader's Mantle, or Battle Master's Superiority Dice), incorporate measures to stop bonus action attacks being made with this regardless of order of events similar to spellcasting rules, and give it a way to grow naturally.)

On your turn when you attack with a light melee weapon held in one hand that did not come from Two-Weapon Fighting, you can also attack with a different light melee weapon held in your other hand. Damage increasing effects (excluding those from the weapons) are only applied to the first of these two attacks to hit. The additional attack's weapon damage die is a d4. You cannot move until both attacks have been dealt nor make attacks with a bonus action during the same turn.
If one of the weapon's has the thrown property, you can throw that weapon instead of making a melee attack with it.

(The intent for the fighting style was to address the style's clunkiness, make TWF less overbearing at Tier 1, and fill an interesting niche none of the other styles approach)

When you use your reaction to make an attack, you can engage in Two-Weapon Fighting. You can draw or stow two one-handed weapons when you would normally be able to draw or stow only one.

(The intent for the Feat to enable a bit more creativity, buff damage slightly, and give a different way to address the clunkiness that doesn't negate the fighting style)

You master fighting with two weapons, gaining the following benefits:

Decided to include a scenario to demonstrate what it's suppose to look like between 4 pure classes that are naturally get an Extra Attack Feature. Melee rogues are unaffected by this other than freeing their bonus action (which seems fair given the extra risk they take being in melee instead staying at range). O-TWF- Original TWF and original fighting style N-TWF- New TWF, with or without the new fighting style GWF- great weapon fighting DD- damage dealt

Let's go with four lvl 5 characters that have the Extra Attack feature, a fighter, a ranger, a monk and a barbarian. All have 20 Dexterity or Strength. And the target has AC 15.

As a base, before feat's, magic, and enchanted weapons involved, this looks better to me.

First up is this stalwart of any fight. When this die-hard engages the enemy with TWF attacks, their ability modifiers are applied only to the first attack from each pair to hit. And this done for any other effects that would buff a weapon's damage. However, if the fighter has a +3 mace or a Firebrand flail, the damage bonus the magic of the weapon itself provided is added. (If this leads to breaking the style, please explain why so I can see if there is a solution).

As a close second, weathered Ranger comes in as swirling death. Has pretty much the same damage as the Fighter, but when using their Hunter's Mark or features like Colossus Slayer, only the first attack of each pair to hit benefits from their damage increasing effects. If Ranger has attack giving features like the Horde Breaker feature, the TWF attack it gets from there would have the same restrictions as the attack that triggered it.

This fast gal zips straight into the fray, cracking kunai and what have you hither and thither with their two weapons. When these guys start attacking, they can choose to engage in TWF or decide they'd rather use their bonus action to make attacks at some point during their turn. Doing one prevents them from doing the other. On the plus side their martial art die would apply to the TWF attacks since it's a replacement effect, not a damage increasing one.

Now comes the party animals, smashing enemies left and right in a hurricane of rage. These guys' rage damage is only supposed to apply to the first of each pair of attacks to hit, though if there's a leak that results in rage damage actually applying, I ain't crying.

Are these balanced and meet the goals I've wanted to address?

It would seem somewhat balanced for a fighter

But definitely an upgrade.
If we take a standard fighter and compare the average damage compared to the original system and two handed fighting, it should look something like this:
(w/o calculating for crits & hitrate, using variant human for feat on level 1 for the Two weapon styles) 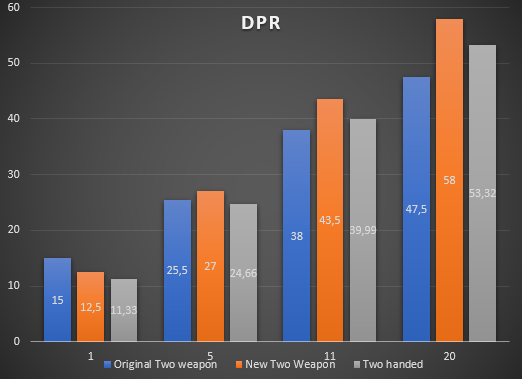 It does bring TWF closer to the scaling of options like Two handed fighting.
And this is without giving the Two handed any feats, like Great Weapon Master or Polearm Master, which are usually the "go to" options for damage. So for your typical fighter, I don't think it's a problem.
Obviously it makes Two Weapon Fighting a much better options for subclasses that relies heavily on bonus actions, like Echo Knight.

I think the big thing to consider when it comes to balance, is how this changes the action economy, probably most notable for a melee Rogue and Ranger.
The standard Rogue would use a Rapier for damage, because there is other good uses for bonus actions starting at level 2.
With no shield proficiency, there would be very little reason not to bring two shortswords instead. Essentially doubling your chance to land an attack for that sweet sneak attack, and doing some extra damage in general.

Cunning Action, Steady Aim, Hunter's Mark and Rage are some early things to consider, that may get very powerful with the removal of the need for a Bonus action for a bonus attack.

It might also be very powerful for a Hexblade Warlock, using the spell Hex.

27
Why is two-weapon fighting considered subpar for fighters?
2
Does this change to the Two-Weapon Fighting bridge the gap with GWF?