How do you help your GM/fellow PCs track buffs/debuffs?

In the spirit of Math is Fun, what's the best way you've found to help your fellow PCs and the GM keep track of buffs and debuffs during play? In our current Jade Regent game, it's gotten to be a major logistical challenge as we have loads of buff spells, bardsong, cavalier's challenge, etc. in play any given round and people forget them a lot of the time. When they do, it makes us all less effective, but also devalues the contribution of the (de-)buffers. Heck, I've started using Hero Lab in play to track them all just on my character (unfortunately, it's not always 100% correct, so I have to track an adjustment separately too...).

We're preparing to start up a Carrion Crown campaign and I'm playing a witch, who is all about debuffs. As the rounds go by I'll be applying rerolls, -2 AC, -2 saves, -2 to hit... I know if I don't help the GM track all those -2's I'm sticking on our opponents then I'll just be throwing away my actions.

We don't use the battle mat except for really major/tactical combats, preferring "theater of the mind" in most cases, so 4e style little widget designators to put on minis don't necessarily help.

I know about Tips for keeping track of NPC stats and conditions but that's more for the GM; in this case I'm a player and need to help the GM and other players keep track even if they're not all that organized (some of the other players are... paying-attention-challenged).

We have a large group so we've grappled with this as well. And it gets worse as you level and options begin opening up with new spells and feats coming into play. We've done two things that can help.

First, I'm a fan of Paizo's Condition Cards. Whenever I'm hit with a condition, I take the time to dig out the card. Beyond just having the rules handy so I know the details of the condition, these help me remember what conditions my character might have. This is like keeping a token handy to remind you of what effects you have going at any given time. If I have the sickened card, I know I have that condition and need to apply it to anything I do. I haven't gone to the trouble to create my own cards for other common buffs/debuffs, but now that I've thought of it, I probably will... In other words, there's no reason a token or reminder has to be on the table next to a mini to be useful—it's as much of a reminder if it's on your character sheet or in your hands or dice cup.

Second, we decided as a group that the person applying the buff/debuff is allowed/encouraged to remind people whenever that buff may be relevant. One of our players is a bard, for example, and that means that pretty much any time someone announces a to-hit or damage result, he pipes in with "+1" (or, now that we've leveled a bit, "+2"). Our cleric does the same when we have bless or Prayer applied. We may or may not have remembered on our own, but we've learned not to be aggravated for the reminder—too often it has meant the difference between landing a hit or not and it's just the cost of having complicated things happening all the time. It's to the point now, that we get a bit testy if we don't hear the reminders. The same applies to reminding the GM, BTW (for the event of debuffs). Or the GM reminding us of things he's applied to our characters. In short, if you cast it, you own it, and part of the job of the frequent buffer is to help those he's buffed to remember the buffs. (and, as an added benefit, it keeps the buffers active during the combat and involved in events because they have to pay enough attention to keep reminding folks).

We play primarily on MapTools, so this is probably less useful if you don’t use the grid much. However, something a lot of heavy buffers use is special tokens (usually flags and the like) off to the side, which are put into play whenever a given buff (Inspire Courage, haste, whatever) is currently active on the party. Because they’re on the map, they tend to get players’ attention when they look to plan out their next move, and that reminds them to include the bonus. It’s far from perfect, but it’s the best method I’ve seen used.

I’d say that even if you don’t use a battle mat often, though, you could still use miniatures/tokens that you just line up facing each other (à la Final Fantasy or something) just for the purposes of keeping track of who is in combat and where the buffs/debuffs are.

One option I've seen work well at conventions, where people know each others character abilities far less well than in a home game, it to use Buff Tents: 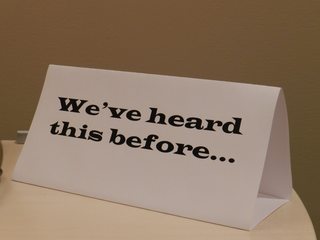 As with Name tents you can put all of the information other players need on the card, leave the card flat with your character sheet when it isn't relevant, and prop it up in front of you when it is.

For instance, it might be worth having an "Allies next to my animal companion gain +2 to all defences" card for my 4th ed. Sentinel/Shaman, along with a "Creatures next to my summons grant combat advantage" card for when has one of his summons is on the field etc.

If you were using a battle mat, then I would also suggest using hats.

These are small paper cones in different colours which will stack and are useful for buffs/debuffs/marks etc. that only apply to a single ally or opponent on the field. You can even use a tent to remind people what each colour & pattern of hat means.

Not the answer you're looking for? Browse other questions tagged organization player-techniques or ask your own question.

11
Tips for keeping track of NPC stats and conditions
1
How to make the GMs job easier?

21
How can I motivate my fellow players?
22
How do you keep track of X-per-day abilities?