What is the correct Wilders (warrior surge) manifesting sequence? Can somebody draw a comprehensive flowchart? 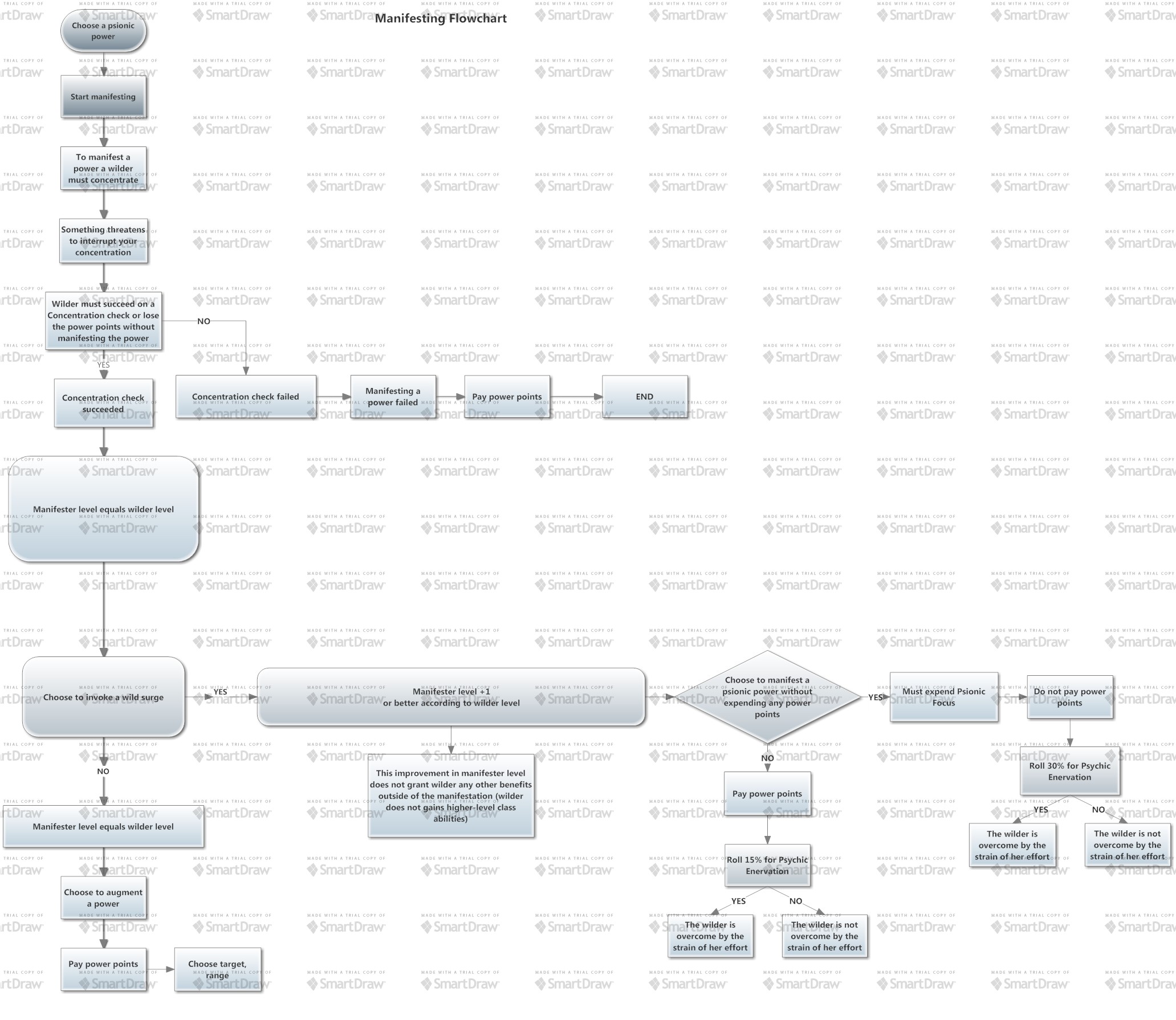 I am little bit confused about the correct manifesting sequence, including every possible option that can be chosen by a wilder. It sounds a little bit silly but we had a quite hard hassle about that.

There are several problems which needs to be clarified. For example :

Whether or not you still take Overchannel damage and Enervation if you fail the Concentration check is debatable enough that your DM might have a different interpretation, but there is support for either reading in the text.

To answer your specific questions:

Where are you reading this, specifically? I don't think I've ever heard of rules in Pathfinder which mentions anything like this. No, you can't change what level you're manifesting a power at after you have already decided prior to invoking surge. If you make the option to manifest a power without paying power points and you enervate because of it you suffer consequences equal to your manifester level.

In other words, you flubbed your casting and due to the rules involving invoking Wild surge without paying for power points, you have to wait ten minutes until you can make another attempt to manifest without power points again.

Instances in which increasing your manifesting level are important when utilizing the power Dispel Psionics (/Magic). In this instance a higher manifester level increases your chance of dispelling magic or psionics.

Using Overchannel can increase your manifester level by up to 3, and in doing so increases the maximum amount of power points you can expend on a power by 3 as well.

If you try manifesting the power Minor Metamorphosis with no power points, using your psionic focus to do so, and suffer enervation, the effect of your Warrior's Surge enervation takes effect and you lose Three hit points.

On that flowchart, directly at the end of the branches stating "The Wilder is overcome by the strain of her effort" you would add the section where penalties for Enervation are calculated.

5
Does Manifester Level count as "pertinent decision" about a power?

5
Does Surge Crystal's effect apply before or after Chaotic Surge's 1d4 roll?
1
Psychic Rogue as a blaster
5
Does Manifester Level count as "pertinent decision" about a power?
4
How can an epic spell-to-power erudite manifest 9th-level spells?
8
Does Psionic Meditation allow a psion to psionically focus his psicrystal as a move action?
3
Is there a way to create a magic item at less than its absolute minimum caster level?
1
How does the Blasting Wilder archetype work?
3
Blasting Wilder with Chaotic Surge
0
Blasting Wilder using a second blast
3
How many feats does an Elan Aegis spend to gain Unlocked Talent and Access Psionic Talent?