Taking into account line-of-sight & blast rules, how would a blast work with a wall between you and an enemy?

If you take into effect the blast rules and the line-of-sight rules, how should we play the blast? Would it wrap the nine squares in front of him, including the wall? Would it go the nine diagonal that would then hit the Goblin? 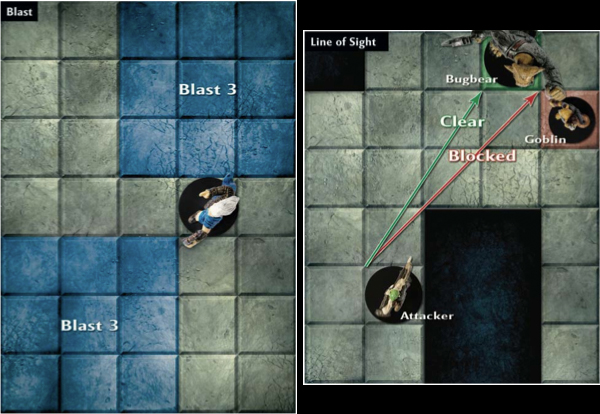 Thanks for any help on the matter!

In the diagram shown, a blast 3 power would not effect either of the targets there is nowhere to start a blast that would reach them. However, were the character to move up one square they would be able to use the top right corner as the start of the blast and actually effect both targets with no penalty.

There are two reason for this.

Not the answer you're looking for? Browse other questions tagged dnd-4e line-of-sight line-of-effect or ask your own question.

6
Does the Goblin Hexer's Vexing Cloud grant concealment and an additional -2 to hit?
11
What effects can hit a phasing creature in a nonmagical wall square?
6
Does undirected damage require line of sight/effect?
3
Does Arcane Reach work through walls
6
Is an out of sight enemy a problem for Warlock's Curse?
4
How do zones and line of effect work, and are they adjusted if the zone follows the player (kinda like an aura, but defined as a zone)?
10
What is the difference between line of sight and line of effect?
3
D&D 4th edition - area/line of effects
5
How do targeting and line of sight for spells work in regards to allies?