How large is a Globe of Invulnerability cast by a Large creature?

The Globe of Invulnerability spell describes its area of effect like so:

An immobile, faintly shimmering barrier springs into existence in a 10-foot radius around you and remains for the duration.

(Note that the spell does not describe the spell's area as a "sphere", which means the rules for spherical spell areas do not seem to apply here.)

It would scale with the creature casting the spell

The term "radius" is usually defined the distance from the center of a circle to its boundary, which would make this spell seem at first to create a "globe" of fixed size. But there is some language in the spell that gives us a hint that the term "radius" is intended in an atypical way. Consider the wording of Globe of Invulnerability (PHB, p. 245, bold and italics added):

An immobile, faintly shimmering barrier springs into existence in a 10-foot radius around you and remains for the duration.

The not only are we told the radius, but that it is a radius "around" you. That is highly unusual terminology: is it meant to indicate that the radius begins at your outer boundary and thus it scales with your size? Or is the term "around" simply meant to complete the previous phrase ("a... shimmering barrier springs into existence... around you"), and this language was included just based on the assumption of a small or medium (PC) caster? In isolation, there's no way to tell.

The terminology of a "radius around" a creature is used infrequently in the PHB, and some of those uses (such as in the description of the spell Holy Aura) are equally ambiguous. However, there is another place where this terminology is used in the PHB where its meaning can much more clearly be derived. It is found in the rules on Creature Size and Space (PHB, p. 191, bold and italics added):

A creature’s space also reflects the area it needs to fight effectively. For that reason, there’s a limit to the number of creatures that can surround another creature in combat. Assuming Medium combatants, eight creatures can fit in a 5-foot radius around another one.

Consider the following image, where the squares represent 5 foot squares, the center of which contains a creature. 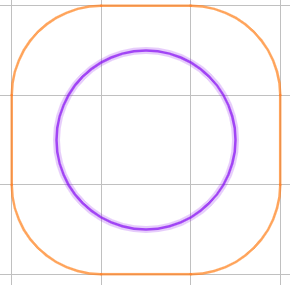 Neither the purple nor the orange curve completely cover the eight squares around the central square, and both cover some part of each of them. But the Dungeon Master's Guide give us guidance for when to include an area "in" a radius: specifically if an area covers "at least half a square" (DMG, p. 251). We can see that the purple curve covers half of none of the outer eight squares (certainly not the four squares in the corners). But the orange curve covers half or more of all of the eight square surrounding the central one. And since we are told that "Assuming Medium combatants, eight creatures can fit in a 5-foot radius around another one", it seems likely that "radius around" means the distance begins at the outer boundary of the creature in the center, not at its central point.

There is further evidence of this conclusion in the DMG. The term "radius around" is used infrequently there as well, specifically to refer to features of the Oathbreaker paladin and the Holy Avenger weapon, which can only be used by Paladins (p. 97 and p. 174 respectively, bold and italics added). In both cases, these terms refer to features of a Paladin's Aura.

Dread Lord...The aura reduces any bright light in a 30-foot radius around the paladin to dim light.

Holy Avenger:... While you hold the drawn sword, it creates an aura in a 10-foot radius around you. You and all creatures friendly to you in the aura have advantage on saving throws against spells and other magical effects. If you have 17 or more levels in the paladin class, the radius of the aura increases to 30 feet.

A paladin's aura is a key example of a feature whose boundaries are defined not by their distance from a single point but rather from the outside of a Paladin's space. In the case of other Paladin aura features, the language is much clearer on this point (such as the Aura of Protection which affects creatures "10 feet of you"), and contains none of the ambiguity found in the "radius around you" phrase. However, there are several hints that the two descriptions of auras should probably be treated identically.

The distances provided in these two features are the same as the distances given other paladin auras (10 and 30 feet respectively). They also scale similarly, in one case starting at 10 feet at lower levels and rising to 30 feet later. To have a Paladin's usual auras (defined as working for creatures "x feet from you") work differently than these auras in the DMG (defined as working in a "x feet radius around you") would create a complicated situation where several of a paladin's auras are one size and others are 2.5 feet smaller in radius. This complication gives us no tangible benefit, and could confuse and slow play in many situations. It would also confuse matters when played on a grid. As previously stated, the DMG states that a circular area of effect is only used on a square if the area covers half or more of a square. In the case of a 10 foot radius centered at your center, this radius would not cover half of any square that is more than 5 feet away from the paladin. Thus, it would effectively be an aura that only covers 5 feet "from you". This point of confusion is highly unlikely to be intentional, so it appears more likely that the two terms ("distance from you" and "radius around you") are meant to be used interchangeably.

Typically, a point of origin is a point in space, but some spells have an area whose origin is a creature or an object.

Jeremy Crawford has specified this in an (unofficial) conversation on twitter:

Question: How do spells with range Self (X-foot radius) work for bigger creatures? Is the radius from center or creature?

Jeremy Crawford: When you create an area of effect with a range of self, your space is the point of origin, whatever your size.

Reply Question: So an Ancient Dragon with Destructive Wave has the potential to wreck more than a Medium cleric doing the same? (Awesome)

The reality is that it is simply easier to use this interpretation in most cases. If a creature has a 5 foot reach, and another has an effect with a range of "Self(5 foot radius)", you'd expect both creatures to be within each other's respective ranges when they were both five feet from each other. Having to account for the thickness of a creature's space or the radius from the center of its body complicates the situation needlessly.

Putting all these features together, we can see that the Globe of Invulnerability spell will scale up with the size of its original caster. Depending on whether or not you follow Jeremy Crawford's advice, it may scale with that creature's space, or perhaps with its body. It would probably be easiest to determine the distance scaled from a creature's space, as a creature's body (especially for an elongated creature like a dragon) can be difficult to map out quickly. Either way, the caster will invariably be inside the Globe when it is cast, and the globe will invariably begin "around" the caster.

While it doesn't say "centered on you", the spell does still state:

a 10-foot radius around you

This implies that "you" are the center of the globe because the test is saying that it extends out 10' all around you. If it's extending out from you, then you are the center.

A creature's size will determine if it fits inside this 20' diameter globe - and a large creature will fit inside given that it controls:

If it extended 10' from your outer edge and you were a Large or larger creature, then it would end up being larger than the radius/diameter provided in the spell.

As a counterexample, see the Paladin's Aura of Protection:

whenever you or a friendly creature within 10 feet of you...

In this case, the Paladin's aura isn't a radius, it's just within 10' of you.If you're Large, or Huge, it'll be within 10' of the total space you control.

Not the answer you're looking for? Browse other questions tagged dnd-5e spells creature-size area-of-effect size-scaling or ask your own question.

13
Can I cast Thunderwave and be at the center of its bottom face, but not be affected by it?
13
Could a Huge or bigger creature (bigger than a 10-foot-radius sphere) use Antimagic Field?