I am looking for a dice rolling mechanic that makes it such that increasing or decreasing a modifier on the roll has a constant multiplier effect on the probability of the outcome.

It doesn't have to be a multiplier of 0.5, in fact I'd much rather it was a multiplier of 0.66-0.75, not such an extreme change. The default unmodded value doesn't need to be 50% chance of success either, it can be something else.

Is there any kind of dice rolling mechanic I can use to simulate something like this?

Roll a number of extra dice along with the base roll

I will start with an example for 0.75 and then explain how this can be more generalized. First, you have your base STAT roll with no modifiers which can be whatever you want. For this example, let's assume it has a 60% chance of success (such as a d20 that needs to roll at most a 12, it doesn't really matter here).

For STAT-x, you simply roll and extra xd4 and if any of these d4 rolls a 1 it is a failure, giving you the progression you want.

Using an extra d4 like this gives you a progression of 0.75 because that's the probability of not rolling a 1 on a d4. You can adjust this to other numbers by using different dice and different ranges of numbers. For example using a 1d3 would allow a 2/3 (0.66...) progression.

You should roll additional XdN where X ist your modifier and \$1\pm\frac{1}{N}\$ will be your multiplier.

If it is a negative modifier, any 1 rolled on a dN will make the check fail, no matter the result of your STAT roll. This results in a probability of $$\text{STAT}\times\left(1-\frac{1}{N}\right)^X$$

If it is a positive modifier, you may reroll your STAT roll for every N rolled on a dN. This results in a propability of $$\text{STAT}\times\left(1+\frac{1}{N}\right)^X$$

You are asking for a (discrete version of the) Laplace distribution. I know of two reasonably efficient ways of approximating this:

Each side rolls an exploding die (i.e. on a max roll, roll the die again and add it to the total) and adds their modifier. Higher total wins. Here's an example on AnyDice using exploding d10s.

Compared to an ideal Laplace distribution: 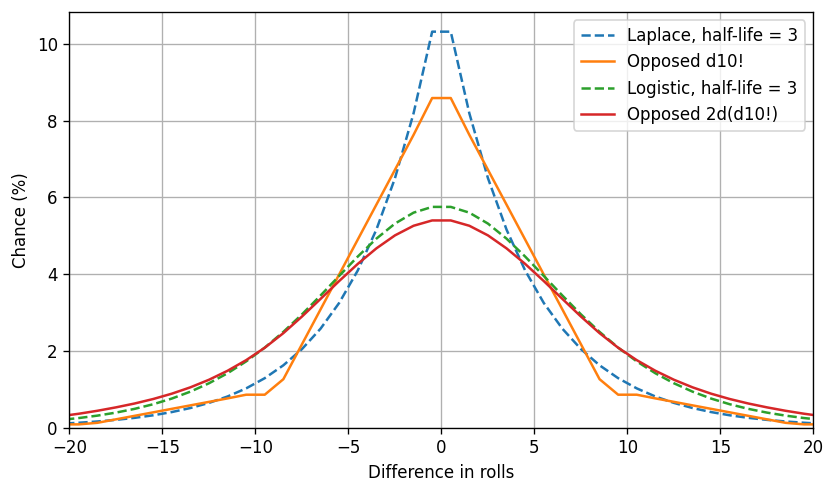 In this type of system, instead of adding a modifier to their roll, the two sides use larger and larger dice as they advance. A geometric series of die sizes is equivalent to a Laplace distribution. Here's an example near-geometric series:

Suppose two players roll step dice against each other, with respective sizes \$A\$ and \$B\$, with ties being broken by coin flip. Without loss of generality, let the first player be the underdog, i.e. \$A \leq B\$.

We can visualize the chance of the underdog \$A\$ winning according to the area on a 2-D diagram, with possible rolls for \$B\$ on the horizontal axis and for \$A\$ on the vertical.

We can transform this into an equivalent fixed-die system by taking logarithms:

This is a Laplace distribution where \$h\$ is a half-life of our choosing. The above step dice sequence has \$h \approx 3\$, meaning the underdog's chances are cut in half about every three die steps they are behind.

Not the answer you're looking for? Browse other questions tagged statistics dice game-design .

6
Can the astrology helping die decrease the chance of success?
12
Considering Complex Dice Roll Probabilities
11
How do I approach the probability of a d100, using 2 d100's?
1
Improving “fumbles” when using pools dice in TROS, part 2
16
How can I figure the number of trials until success?
5
Help with probability for a complicated dice pool mechanic
7
Is probability of succeeding an opposed check the same when the second check is passive?
34
What does dice notation like "1d-4" or "1d-2" mean?
4
How do Hard or Extreme rolls vs increasing penalty dice affect the odds of success or failure?